WHAT: THE GIRLS FROM CORONA DEL MAR, a novel

WHY: “An affecting debut.
A nuanced portrait of two women who are sisters in everything but name.” —PUBLISHERS WEEKLY

“This book should appeal to readers who enjoy dark-edged relationship dramas, such as the works of Jane Hamilton and Wally Lamb.
“Growing up in a lower-middle-class neighborhood in Southern California, Mia always compared herself unfavorably with best friend Lorrie Anne, who had a serene sweetness and goodness and, in Mia’s eyes, a perfect family. Then a series of personal tragedies befalls Lorrie Ann and pulls the two friends in divergent directions: Mia to Yale and eventual success as a classics scholar; Lorrie Ann to early widowhood, motherhood to a severely handicapped son, and, eventually, drug addition.
“When Lorrie Ann unexpectedly turns up in Istanbul, where Mia is living on a research grant, Mia must reassess everything she thought she knew about herself, her friend, and her perceptions.” —Christine DeZelar-Tiedman, LIBRARY JOURNAL 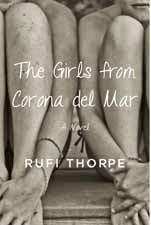