WHAT: CHINA’S SECOND CONTINENT:
How a Million Migrants Are Building a New Empire in Africa

WHERE: China and Africa

WHY: “Frank, straightforward reporting of a key, though largely ignored, element in African development, for better or ill…A unique and unsettling study of what many in the West do not want to see.” —KIRKUS REVIEWS

“Lively interviews and vivid first-person reportage.
This book will appeal to students of China and Africa, and anyone interested in the shifting contours of the global economy and its geopolitical consequences.”
—PUBLISHERS WEEKLY

“French capably illustrates that although the Chinese omnipresence in Africa may be a form of soft imperialism, it is also a result of the crushing pressures—lack of space, merciless business competition, pollution—of modern Chinese society.
“Although several recent books have discussed, in variously alarmist fashion, China’s recent incursions into Africa in pursuit of resources and profit, former New York Times journalist French has the advantage of significant personal experience in both Africa and China. He also speaks Mandarin, so he can converse directly with some of the million or so members of the Chinese diaspora in Africa.
“They are a diverse lot—doctors, engineers, farmers, entrepreneurs, lobbyists, laborers, and prostitutes, among others—and accounts of their experience are often absent from analyses of Chinese-African relations, which typically focus on infrastructure building and resource grabbing. For many Chinese, he suggests, Africa means opportunity and relative freedom that cannot be had at home. If French is sympathetic to the plight of many Chinese immigrants, however, he remains critical of their casual racism and general callousness about their African hosts. And as he laments the seeming inevitability of corruption and environmental degradation, French’s disappointment in his cherished continent is palpable.”
—Brendan Driscoll, in a starred review for BOOKLIST 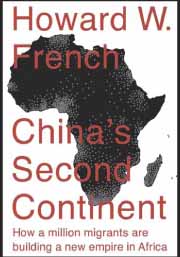 From the beginning of the book: When China launched its historic opening toward the end of the 1970s, the country and its people not only became the fortunate beneficiaries of astute new policies, but also — crucially — of magnificent timing. The next few years, as they unfolded, would take shape as an era of unprecedented globalization, and no country would profit more from the coming tidal wave of economic change. In little more than a decade, China went from being a poor society with an economy that produced few goods for export and imported little, to positioning itself to become the the so-called factory of the world, as we recognize it today.