WHERE: Set in China.

WHY: “A timely analysis that sheds light on the realities of American engagement in Asia.
“Asia expert and former foreign correspondent Bernstein addresses a pivotal year in Sino-American relations in this meticulously researched, stimulating book. Recent skirmishes between the superpowers hark back to this ‘turning point’ 70 years ago when relations between Washington and Beijing soured.
“Bernstein opens with an overview of the devastating and prolonged Second Sino-Japanese War. A cast of American war heroes rescued China from Japan and established a democracy, but American leaders were blindsided by the Chinese Communist Party’s alliance with the Soviets, which was a major cause of U.S. involvement in two subsequent Asian wars. Part two introduces the colorful American diplomat Patrick J. Hurley and the ongoing struggle of the U.S. to keep Chiang Kai-shek, leader of the nationalist Kuomingtang, in power, while part three explores the dilemma of U.S. policy toward a China ‘divided into two countries.’ President Truman appointed George C. Marshall ambassador to China at the end of 1945, but the following year brought chaos, and nothing could divert Mao from his policy of revolution.
“Arguing that in 1945 American foreign policy was ‘bungling, inconsistent, and improvised,’ Bernstein states that going forward the U.S. must set reasonable goals and pursue them sensibly.” —PUBLISHERS WEEKLY

“Thoroughly researched and well-argued.”
—Joshua Wallace, in a starred review for LIBRARY JOURNAL

“A nuanced hindsight assessment that expertly pursues the historical ramifications of roads not taken.” —KIRKUS REVIEWS 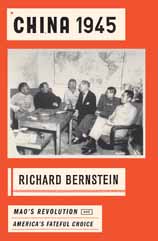