WHAT: THE PARTHENON ENIGMA

WHY: “An explosive reinterpretation of a classical icon.
“Universally recognized as a symbol of Western democracy, the Parthenon emerges in Connelly’s bold new analysis as a shrine memorializing myths radically alien to modern politics. Newly recovered classical literary texts and surprising archaeological finds compel readers to acknowledge the implausibility of the usual interpretation of the Parthenon’s frieze sculptures as a depiction of fifth-century Athenians celebrating their Panathenaic Festival.
“To buttress a quite different interpretation, Connelly cites lines from a long-lost Euripides play, so investing the Parthenon statues with mythical—not historical—significance, enshrining the legendary King Erechtheus and Queen Praxithea and the three daughters they heroically
sacrifice to save their threatened city. The discovery that Athenians believed their political order originated with virgin sacrifice may shock readers, despite the ubiquity of human sacrifice in the world’s prehistory and the centrality of blood sacrifice in Christianity. Yet in Athens’ violent founding myth, Connelly sees a reminder of how 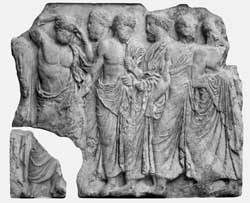 completely Athenians put community welfare above self-interest.
“Newly aware of the potent message embedded in the Parthenon frieze as a whole, many readers will endorse Connelly’s concluding appeal to British authorities, asking them to return to Greece the priceless pieces of the frieze that have long been held in London.”
—Bryce Christensen,
in a starred review for BOOKLIST

“A masterly volume. Connelly’s depth of knowledge and scholastic effort shine through brilliantly. Her thorough research presents a convincing argument for newly comprehending the Parthenon’s frieze and potentially reevaluating long accepted research on the subject.” —Brian Renvall, in a starred review for LIBRARY JOURNAL 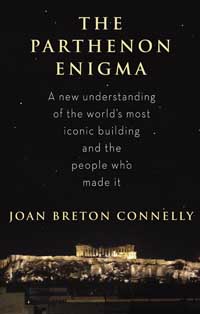 First line of the book: Never before in human history has there been a structure that is at once so visible to the world, so celebrated, so examined, so invested with authority, and yet, at the same time, so strangely impenetrable at its core. After centuries of study and admiration, the Parthenon remains, in so many ways, an enigma.

Media Resources:
About the book | About the author | Read an excerpt | Download the jacket or the author photo | Watch a video