WHAT: THE ATTENTION MERCHANTS:
The Epic Scramble To Get Inside Our Heads

WHY: “An engrossing study
of what we hate about commercial media.
Vigorous and amusing, filled with details of colorful hucksterism and cunning attention-grabbing ploys along with revealing insights into the behavioral quirks they instill in us.”
—PUBLISHERS WEEKLY

“Forget subliminal seduction: every day, we are openly bought and sold, as this provocative book shows.” —KIRKUS REVIEWS

“Part history and part social wake up call, this book is for everyone.”
—Bonnie A. Tollefsen, LIBRARY JOURNAL

“A serious and timely study, delivered in a layperson’s language, that will add depth to an ongoing, urgently needed national and global conversation.
“Acclaimed Columbia University law professor Tim Wu, who popularized the concept of net neutrality, explores in surprising detail the history of those ‘attention merchants’ among us who have ingeniously drawn our notice, then packaged it for financial and political gain, beginning (after
religion, ‘the first great harvester of attention’) with the eighteenth-century ‘penny papers’ of New York City and posters of Paris, then moving to British WWI propaganda campaigns, the emergence of Madison Avenue in newspaper and magazine advertising, Hitler’s theories of persuasion (‘[the masses] will lend their memories only to the thousandthfold repetition of the most simple idea’), the almost accidental development of commercial TV and radio in America, the parsing of geographical clusters for advertising specificity, computer games, commercially successful search engines such as AOL, and the growth of the ‘celebrity-industrial complex,’ clickbait, and, of course, Facebook, Google, BuzzFeed, and the smartphone.
“Wu also covers our history of pushback, from government truth-in-advertising laws to the TV remote and Apple’s adblockers, ending with a call for reclaiming that most precious of natural resources, our undivided attention.”
—Alan Moores, in a starred review for BOOKLIST

From the beginning of the book:
Since the rise of capitalism, it has been known that capturing someone’s attention could cause him to part with some money. Even before that, there was paid spectacle, like the modern theater. But as recently as the late nineteenth century, the first real industries of attention capture were still embryonic, though by then, printed matter like books and broadsheets had joined live spectacle as mental fodder created for profit. From the 1890s through the 1920s, there arose the first means for harvesting attention on a mass scale and directing it for commercial effect, thanks to what is now familiar to us in many forms under the name of advertising. At its inception it was as transformative as the cotton gin. For advertising was the conversion engine that, with astonishing efficiency, turned the cash drop of attention into an industrial commodity. As such, attention could be not only used but resold, and this is where our story begins. 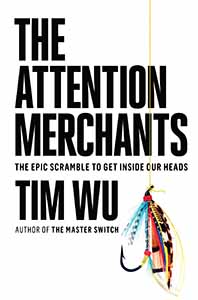