Feel that chill in the air? Fall is coming and that means back to school season. True, you’re probably not actually heading to class this year, but we’ve got the next best thing: a book set at school! From the Northeast to the Midwest, high school to college, we know you’ll love at least one of these scholastic reads. 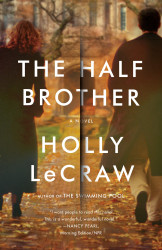 The Half Brother by Holly LeCraw

Charlie Garrett was never sure of his place during his Atlanta childhood. His dad died in Vietnam before he was born; he always felt like a guest in his stepfather’s wealthy family. It is only as a young teacher at the shabby-genteel Abbott School in Massachusetts that he can finally find himself. He begins his reinvention, falling in love with May Bankhead, the school chaplain’s beautiful daughter, and leading a charmed life—until he breaks both her heart and his own. May leaves Abbottsford, he thinks forever.

Nearly a decade later, the fragile peace that Charlie has built is shattered by the arrival of his golden-boy half brother—and the return of his first love. Trying to set things right, Charlie pushes his brother and May together, inadvertently creating a triangle of secrets, regrets, and desires, that threatens to consume them all. 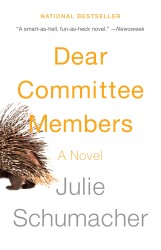 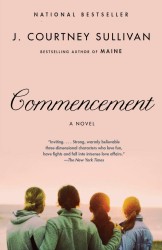 The bestselling author of Maine brings us a sparkling tale of friendship and a fascinating portrait of the first generation of women who have all the opportunities in the world, but no clear idea about what to choose.

Assigned to the same dorm their first year at Smith College, Celia, Bree, Sally, and April couldn’t have less in common. Celia, a lapsed Catholic, arrives with a bottle of vodka in her suitcase; beautiful Bree pines for the fiancé she left behind in Savannah; Sally, preppy and obsessively neat, is reeling from the loss of her mother; and April, a radical, redheaded feminist wearing a “Riot: Don’t Diet” T-shirt, wants a room transfer immediately. Written with radiant style and a wicked sense of humor, Commencement follows these unlikely friends through college and the years beyond, brilliantly capturing the complicated landscape facing young women today. 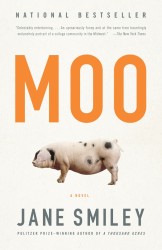 In this darkly satirical send-up of academia and the Midwest, we are introduced to Moo University, a distinguished institution devoted to the study of agriculture. Amid cow pastures and waving fields of grain, Moo’s campus churns with devious plots, mischievous intrigue, lusty liaisons, and academic one-upmanship, Chairman X of the Horticulture Department harbors a secret fantasy to kill the dean; Mrs. Walker, the provost’s right hand and campus information queen, knows where all the bodies are buried; Timothy Monahan, associate professor of English, advocates eavesdropping for his creative writing assignments; and Bob Carlson, a sophomore, feeds and maintains his only friend: a hog named Earl Butz. Wonderfully written and masterfully plotted, Moo gives us a wickedly funny slice of life. 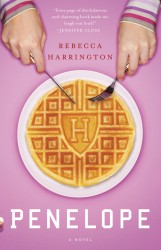 When Penelope O’Shaunessy, “an incoming freshman of average height and lank hair” steps into Harvard Yard for the first time she has lots of advice from her mother: “Don’t be too enthusiastic, don’t talk to people who seem to be getting annoyed, and for heaven’s sake, stop playing Tetris on your phone at parties.” Penelope needs this advice. She is the kind of girl who passes through much of her life with coffee spilled on her white shirt, who can’t quite tell when people are joking, and who, inevitably, always says the wrong thing. But no amount of coaching will prepare Penelope for the people she meets at school.

Gloriously skewering the social hierarchy of college, Penelope is the brilliantly funny story of one of the most singular, memorable heroines in recent fiction. 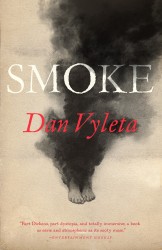 Fans of The Night Circus by Erin Morgenstern and Arcadia by Iain Pears are sure to be mesmerized by Dan Vyleta’s thrilling blend of Dickensian historical fiction and fantasy, as three young friends scratch the surface of the grown-up world to discover startling wonders—and dangerous secrets.

In an alternate Victorian England those who are wicked are marked by the smoke that pours out of their bodies. The aristocracy are clean, proof of their virtue and right to rule, while the lower classes are drenched in sin and soot.

Thomas Argyle is the only son of a wayward aristocrat. Charlie Cooper is his best friend. When Thomas finds himself under the boot heel of a sadistic headboy in the treacherous halls of their elite boarding school, he and Charlie begin to question the rules of their society. Then the boys meet Livia, the daughter of a wealthy and powerful family. She leads them to a secret laboratory where they learn that smoke may not be as it seems, and together they set out to uncover the truth about their world.