WHAT: MIDNIGHT SUN, a novel

WHERE: The story is set in Norway.

WHY: “Darkly funny and deadly serious.
“Jon, the narrator of this excellent standalone from Nesbø, is a ‘fixer,’ or hit man, akin to the hero of Blood on Snow. Jon, who has done jobs for an Oslo crime boss known as the Fisherman, has fled the city for Kåsund, a tiny village in the far north populated by Sami (Lapps) and dominated by a very strict religious ethos. Taking refuge in a church, he tells the townspeople he meets that his name is Ulf.
“A stranger in a strange land, Ulf slowly reveals what led him to leave Oslo: a failed hit and a theft that has Johnny Moe, the Fisherman’s henchman, after him. Ulf is a bad boy with a heart of gold; he got into trouble because he was trying to help someone close to him. His self-mocking deprecations are endearing: ‘Not that I’m an irresponsible or careless person; I’ve just got really bad judgment.’
“Immaculately plotted and perfectly paced, the book is also darkly funny and deadly serious. Scandinavian gloom notwithstanding, it has a neatly satisfying and surprisingly moving ending.” —PUBLISHERS WEEKLY, in a featured boxed review 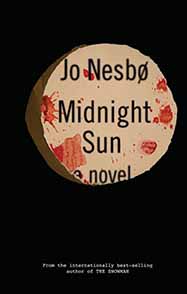 From the beginning of the book: How are we to start this story? I wish I could say that we’ll start at the beginning. But I don’t know where it starts. Just like everyone else, I’m not truly aware of the real sequence of cause and effect in my life. Does the story start when I realized that I was only the fourth-best soccer player in the class? When Basse, my grandfather, showed me the drawings — his own drawings — of La Sagrada Familia? When I took my first drag on a cigarette and heard by first track by the Grateful Dead? When I read Kant at university and thought I understood it? When I sold my first lump of hash? Or did it start when I kissed Bobby — who’s actually a girl — or the first time I saw the tiny, wrinkled creature who would end up being called Anna screaming up at me? Perhaps it was when I was sitting in the Fisherman’s stinking back room and he was telling me what he wanted me to do. I don’t know. We store up all sorts of stories with fabricated logic, so that life can look as though it has some meaning.