WHAT: THE DEVIL’S CAVE, a novel

WHERE: Set in the French village of St. Denis.

WHY: “Charming…Bruno, an affable gourmet and dogged investigator, is a winning lead.
“At the start of Walker’s fifth novel featuring Bruno Courrèges, police chief in the French village of St. Denis, reports that a dead naked woman is drifting downstream in a boat on the local river disturb the policeman’s choir practice. Once the vessel is secured, Bruno goes aboard. Along with the corpse, whose belly is marked with a pentagram, he finds a black cockerel, the bird’s severed head, and black candles. Identifying the woman and the cause of her death proves less than straightforward, and the mystery deepens when another person turns up dead. Rumors that the woman, who’s deemed a suicide, was involved in conducting a black mass don’t please the town mayor, who’s not eager for the negative publicity they engender.” —PUBLISHERS WEEKLY 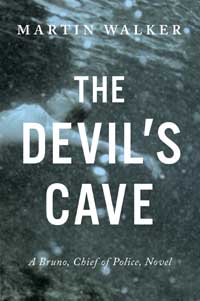