WHAT: STRANGE GLORY: A Life of Dietrich Bonhoeffer,
by Charles Marsh

WHY: “A fresh look at
the famed theologian and anti-Nazi activist.
“Both intimate and theological, Marsh looks anew at Dietrich Bonhoeffer (1906-1945), using rarely glimpsed correspondence to paint a warts-and-all portrait of this German martyr.
“His dispassionate biography excels in two ways. First, Marsh thoroughly details how Bonhoeffer related to theology and to the theological backdrop of his times. Even as a young man, he rubbed shoulders and corresponded with some of the premier spiritual figures of his day: Niebuhr, Barth and even, to a slight degree, Gandhi. A major point of exploration for the author is how such people shaped the rising theological star. Secondly, Marsh attempts to provide a more closely examined view of Bonhoeffer’s personality than past biographers.
“Marsh delves into Bonhoeffer’s extraordinarily intimate relationship with his student, Eberhard Bethge, providing more detail, and more fodder for psychoanalysis, than previous biographers. Throughout the work, Marsh looks for ways of revisiting old truths about Bonhoeffer and offering fresh perspectives. Even his death is re-examined. Instead of simply repeating the story told by the concentration camp doctor that he died a quick death with grace and composure, Marsh points out that camp survivors have told different stories about how executions took place, leading one to believe Bonhoeffer suffered a terrible and tortuous end.
“There is no doubt Marsh’s portrayal will infuse new controversy into discussions about Bonhoeffer for years to come.” —KIRKUS REVIEWS 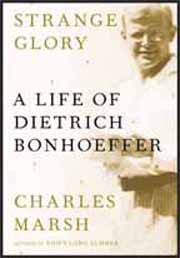 From the beginning of the book: Unlike most Protestant theologians of the twentieth century, Dietrich Bonhoeffer was not the child of a minister. The sixth of eight children (his twin being the seventh), he was born on February 4, 1906, in Breslau, into a family or prodigiously talented humanists, who preferred spending religious holidays in the festive company of relatives and friends rather than in church. “Popguns, soldiers!” he wrote in his first letter to Father Christmas. Over the years he would ask for muscial instruments, suits of clothes, fur hats, shirts and ties, trips abroad, shoes for every occasion, and the works of Immanuel Kant and G.W.F. Hegel. His wishes were most often granted.