WHAT: THE SILK ROADS:
A New History of the World

WHERE: The ancient trade routes linking Europe and China.

WHY: “A work of dizzying breadth and ambition.
“Upending the traditional narrative of Western enlightenment and world domination as the inevitable descendants of Greek and Roman intellectual ferment, Oxford historian Frankopan places the silk roads — the long, remote Central Asian trading routes linking Europe and China — at the center of human history.
“The silk roads served as conduits for goods and ideas as well as plagues and marauding armies, and their location at the nexus of Europe and Asia continues to drive world events today…those opening to any page will find fascinating insights that illuminate elusive connections across time and place.
“Frankopan’s thoughts on Islam, for instance, begin with newly discovered ‘wisps of text’ that are reshaping understanding of Muhammad’s life and stretch across centuries to the modern luxuries of the ‘oil-soaked’ Middle East. The Black Plague — carried west by the Mongols –devastated Europe and the Middle East, but ‘the plague turned out to be the catalyst for social and economic change that was so profound that far from marking the death of Europe, it served as its making.’
“Frankopan approaches his craft with an acerbic wit, and his epochal perspective throws the foibles of the modern age into sharp relief.”
—PUBLISHERS WEEKLY, in a featured starred review

“A daringly revisionist history of world.
A timely challenge to conventional thinking about a pivotal part of the globe.”
—Bryce Christensen, in a starred review for BOOKLIST

“A sweeping and fascinating chronicle.
Frankopan weaves together his many narrative strands with verve and impressive scholarship. A vastly rich historical tapestry that puts ongoing struggles in a new perspective.” —KIRKUS, a starred review 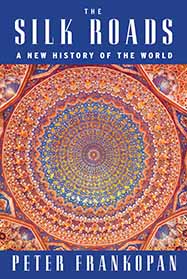 From the beginning of the book: From the beginning of time, the center of Asia was where empires were made. The alluvial lowlands of Mesopotamia, fed by the Tigris and Euphrates, provided the basis for civilization itself — for it was in this region that the first towns and cities took shape. Systematized agriculture developed in Mesopotamia and across the whole of the “Fertile Crescent,” a band of highly productive land with access to plentiful water, stretching from the Persian Gulf to the Mediterranean coast. It was here that some of the first recorded laws were disseminated nearly 4,000 years ago by Hammurabi, King of Babylon, who detailed his subjects’ obligation and set out fierce punishments for their transgressions.