WHAT: HOW AMERICA LOST ITS SECRETS:
Edward Snowden, the Man and the Theft,
by Edward Jay Epstein

WHY: “A wild and harrowing detective story
and impressively evenhanded portrait
of a very sticky case.
“A nuanced portrait of the government contractor who absconded with top-secret National Security Agency documents in May 2013.
“Is Edward Snowden a hero or a traitor? In this sterling investigative study of Snowden’s theft of documents from the NSA, where he was contracted to work, and his subsequent alert to international journalists and flight to Hong Kong and then Moscow, investigative journalist Epstein offers a multilayered examination of what Snowden’s theft actually entailed—and what it means for America’s national security.
“In his late 20s and suffering grievances over perceived incompetence by his superiors at the CIA, where he initially worked, Snowden had taken a speed course in international hacking and befriended many of the online hacktivists and otherwise disgruntled counterculture figures who gravitated toward Tor anonymity software and WikiLeaks. He was a restless high school dropout living with his single mother and finding in computer games a fantasy vision and a series of aliases. He also agreed with hackers expressing outrage over government surveillance overreach.
“In presenting the Snowden case, Epstein focuses on the discrepancies in the narrative that Snowden presented in his video made with journalists Laura Poitras and Glen Greenwald when he first arrived in Hong Kong (the two ultimately made the film Citizenfour), days before Snowden sought asylum in Moscow in June 2013. Of the million-plus files that he had hacked from the NSA, only a few were given to Poitras and Greenwald, as well as WikiLeaks, supposedly only as an act of whistleblowing. Yet the rest — the most sensitive material dealing with the NSA’s ability to conduct intelligence across the globe — was never accounted for. Had Snowden destroyed these files, or had he been lured by Russian intelligence to effect his espionage?”
—KIRKUS, in a starred review

“A riveting and informative work
for both Snowden watchers and espionage buffs.”
—Carl Hays, in a starred review for BOOKLIST 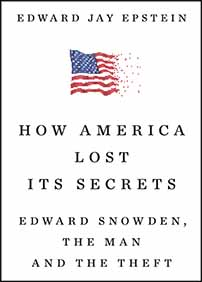 From the beginning of the book:
Whistle-blowers do not ordinarily steal military secrets. Nor do they flee to the territory of America’s principal adversaries. A fugitive, especially one lacking a Russian visa, does not wind up in Moscow by pure accident. It’s hard to imagine that a Russian president with the KGB background of Putin would give his personal sanction for a high-profile exfiltration from Hong Kong without weighing the gain that might proceed from it… Part of his calculus would be that the defector from American intelligence had taken possession of a great number of potentially valuable documents from the inner sanctum of the NSA and, aside from these documents, claimed to hold secrets of great importance in his head. To be sure, the practical value of his stolen archive would require a lengthy evaluation by Russia’s other intelligence services. But it is hard to believe that a defector who put himself in the hands of the FSB, the successor to the KGB, and other Russian intelligence services wouldn’t be expected to cooperate with them.