WHAT: SAVING CENTRAL PARK:
A History and a Memoir

WHY: “An inspiring story of
a defiant woman and the landscape she loves.
“How a public-private partnership revitalized Manhattan’s famed park. In 1980, Rogers, as the first Central Park administrator, founded the Central Park Conservancy, a nonprofit corporation whose mission was to rescue the park from a ‘dire condition’ of deterioration and return it to a state of scenic beauty and clean, safe recreation. Decades of neglect, coupled with the use of the park for ‘mass events and bizarre happenings,’ had resulted in crumbling buildings, eroded slopes, graffiti-emblazoned walls and sculptures, and trampled vegetation. Tourists were told to avoid the park, which had a reputation for being ‘dangerous and scary.’
“Rogers looked back to the park’s picturesque past, embracing the aesthetic of 19th-century landscape architect Frederick Law Olmsted, who transformed ‘a ragged 843-acre wasteland’ into ‘a masterpiece of landscape design and paragon of social beneficence’ in a mere 15 years.
“Her task was daunting: She had ‘no authority over park workers, no city funds to hire new ones, and no way to reform existing union rules linked to narrowly defined civil service job titles.’ Private support was essential, and Rogers identifies with gratitude three early benefactors, the ‘Great Park Ladies’ Brooke Astor, Iphigene Sulzberger, and Lucy Moses. By the time Rogers left her position in 1995, the Conservancy had donated more than $100 million of private money to restoring the park, and the organization became a model for other public-private partnerships.
“Besides offering a historical overview, Rogers documents the challenges she faced from city administrators and private individuals. Bird-watchers, for example, once mounted a vicious campaign when the Conservancy planned to thin out some trees, and a proposed memorial to John Lennon was saved only because of the flexibility and generosity of Yoko Ono. Rogers learned that effective leadership required the three Ps—patience, passion, and persistence—as well as power, politics, and ‘the purse.'”
–KIRKUS REVIEWS

“A multifaceted portrait of the park’s renaissance.
A heartfelt plea for people to fulfill their responsibilities to maintain green spaces in the cement jungle.” –PUBLISHERS WEEKLY 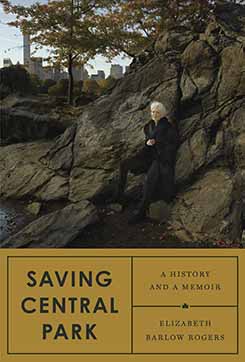