WHAT: RAZOR GIRL, a novel

WHERE: The story is set in Florida, of course!

WHY: “South Florida’s master farceur is back to reassure you that fiction is indeed stranger than truth.
“Rejoice, fans of American madness who’ve sought fulfillment in political reportage. Even though a prefatory note indicates that both the come-hither title and the stuff about giant Gambian pouched rats are rooted in reality, no one but Hiaasen could have dreamed up the complications arising from the collision of Merry Mansfield with talent agent Lane Coolman — a literal collision, since she rams his rented car while shaving her bikini area in the driver’s seat of a Firebird.
“Make that multiple collisions, since Lane turns out to be only the latest victim of Merry and her partner Zeto’s kidnap-for-hire schemes. In this case, he’s the wrong victim, mistaken for beach-replenishment contractor Martin Trebeaux, whose swindling has put him on the wrong side of Calzone crime family capo Dominick ‘Big Noogie’ Aeola. Since Coolman’s being held captive, he can’t be on hand to walk his client Buck Nance, the reality star of Bayou Brethren, though a personal appearance at the Parched Pirate, and Buck goes off script into a racist rant that sparks a demonstration and sends him fleeing, though he’s still capable of inspiring Benny Krill, a murderous apprentice racist who dreams of joining him on his show.
“After laboring in vain to persuade Jon David Ampergrodt, his boss at Platinum Artists Management, as well as Merry and Zeto that he’s worth ransoming, Coolman escapes, but it doesn’t matter: he’s still confined in the zoo that’s Key West, where liability lawyer Brock Richardson’s fiancee loses the $200,000 ring he didn’t bother to resize after his fatter former fiancee returned it, and when his neighbor, health inspector Andrew Yancy, discovers it, he hides it in the hummus in the hope that an indefinite search for the bauble will stall Richardson’s plan to build a McMansion that will obstruct Yancy’s sea view.
“How can Hiaasen possibly tie together all this monkey business in the end? His delirious plotting is so fine-tuned that preposterous complications that would strain lesser novelists fit right into his antic world. Relax, enjoy, and marvel anew at the power of unbridled fictional invention.” —KIRKUS, a starred review

“An immensely entertaining wild ride through the Florida Keys.”
—Jane Murphy, in a starred review for BOOKLIST 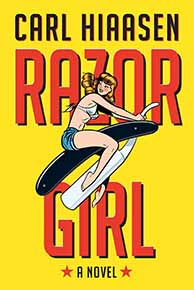