WHAT: SCHUBERT’S WINTER JOURNEY:
Anatomy of an Obsession

WHY: “A book to match its subject in richness and finesse.
“One of its finest interpreters, Bostridge has publicly performed Franz Schubert’s great song cycle, Winterreise, more than 100 times. A setting of 24 poems by Wilhelm Müller (1784–1827), the piece is a defining work of Romanticism, the legend of a young man, cast away from the woman he loves, who wanders through the depths of winter, becoming ever more thoroughly outcast until…The final song implies the wanderer’s death or, perhaps, forecasts his faltering reentry to the world.
“Bostridge, PhD historian as well as musician, devotes a chapter of musical, biographical, social, and art-historical commentary to each song in the cycle, all the while maintaining his performer’s perspective on Schubert’s masterpiece. He explains how it might be, socially, that the wanderer has lost love and home together. He elucidates the wanderer’s relationship to the literary figures of the foredoomed lover popularized by Goethe and of the outcast created by Lord Byron.
“He relates the cycle’s setting of snow and ice to the great scientific discoveries and the great German art of Schubert’s era. He shows the influence of Schubert’s wanderer on subsequent literature, notably including Thomas Mann’s The Magic Mountain and the theater of Samuel Beckett. And he discloses Schubert advancing the art of music in the rhythms of a single bar of piano accompaniment.”
—Ray Olson, in a starred review for BOOKLIST

“Illuminating and comprehensive…offers a surprise with every turn of the page.”
—KIRKUS REVIEWS

“An enchanting book…for lovers of both fine music and European cultural history”
—Edward B. Cone, in a starred review for LIBRARY JOURNAL 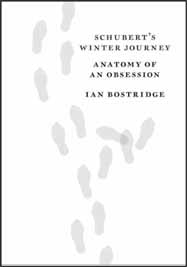