WHY: “A riveting portrait
of a society weakened by internal decay.
“Notwithstanding the cultural brilliance of the Belle Epoque, the first half of the twentieth century was, in many ways, disastrous for France. It included the physical and human destruction of the Great War, the failed diplomacy of the interwar years, the rapid military collapse in WWII, and the shame of the Vichy regime.
“As this superb study reveals, these disasters were directly linked to a political and cultural rot that permeated all levels of French society. On the eve of WWI, France was still racked by unresolved issues carried over from the previous decades. The hatreds engendered by the Dreyfus affair, the conflicts between Catholics and secularists, and the riffs between staunch republicans and monarchists were still fought out in the popular press, literary organs, and sometimes in the streets.
“On a more fundamental level, Brown describes a retreat from the rationalism of the Enlightenment and an embrace of emotionalism and romantic nostalgia among French elites. This was manifested in an exclusionary nationalism, virulent anti-Semitism, and a general distrust of pluralistic democracy. This is a riveting portrait of a society weakened by internal decay.” —Jay Freeman, in a starred review for BOOKLIST

“Francophiles will love this book.
“Brown once again demonstrates his profound knowledge of French history, its people and their psyche…Read this illuminating book to see frightening similarities to the early years of the 21st century. The lies, innuendo, invented evidence and baseless arguments are all too familiar.” —KIRKUS REVIEWS 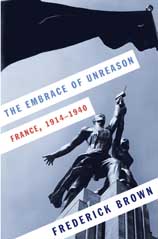 From the beginning of the book: Word that Archduke Francis Ferdinand, heir to the Hapsburg throne, had been shot dead in Sarajevo by a nineteen-year-old Serb named Gavrilo Princip made front-page news in Paris on June 28, 1914. People were shocked. But to Frenchmen, who regarded Serbia, if they claimed to know anything about her, as the primitive underbelly of Europe, where peasants dug houses under hillsides, where pigs driven by swineherds armed to the teeth outnumbered people, and where Tumult was a house god, the assassination seemed very much in character.

Tags: Embrace of Unreason, For the Soul of France, Frederick Brown, French history, Knopf, world history
Posted in Media Center, Not on Homepage | No Comments »