WHAT: A FRIEND OF MR. LINCOLN, a novel

WHERE: The story his set in Springfield, IL. Author tour.

WHY: “A superb historical novel.
“Harrigan’s newest epic adds to his reputation as a stellar historical novelist. Set in Illinois, mostly in the 1830s and 1840s, this tale takes a powerfully astute look at the public and private sides of the young Abraham Lincoln and the agonizing struggles he endured trying to reconcile the two.
“Paralleling his character development is that of Springfield, the prospective state capital, where hogs roam the dirty streets and speculators and politicians muscle in, seeking to ‘live a life of consequence.’ Among the most prominent is Lincoln, a lanky and popular member of the General Assembly, with a talent for telling off-color jokes and capturing a crowd’s attention.
“Harrigan’s narrator is the fictional poet Cage Weatherby, who becomes Lincoln’s close friend. This works well, for Cage also has a riveting personal story. Full of wild ambition, yet awkward around women and prone to depression, Lincoln takes his time working out his approaches to the polarizing issue of slavery and to the lively and refined Mary Todd. In addition to fine personality depictions, readers get a firsthand glimpse of early Illinois politics, a physically dangerous, occasionally bloody endeavor, in this superb historical novel about ethics, morality, and the nature of courage, that feels as vital as today’s news.” —Sarah Johnson, in a starred review for BOOKLIST

“A first-rate rendering.
Harrigan shows a young Lincoln in all his moods and temperaments, providing context with vividly detailed historical events.”
—Donna Bettencourt, in a starred review for LIBRARY JOURNAL

“A standout novel.” —PUBLISHERS WEEKLY in a featured starred review. 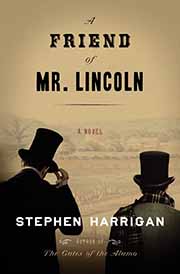