WHAT: THE GARGOYLE HUNTERS, a novel

WHERE: The story is set in Manhattan

WHY: “A remarkably tender love letter to a city and imaginative fiction par excellence.
“Thirteen-year-old Griffin Watts is tasked by his mother to destroy a long-abandoned outhouse, out of which a large gnarled tree has been growing in the fertile soil behind their five-story brownstone. This metaphor sets the tone for Gill’s stellar debut, in which the Caulfieldesque hero must navigate both the crumbling marriage of his eccentric parents and the impending disaster that is 1974 New York City.
“While his conceptual-artist mother creates mosaics out of egg shells, Griffin and his sister, Quigley, battle an eccentric cast of boarders for the meager provisions in the pantry. Craving the attention of his estranged father, Griffin sneaks into his dad’s warehouse and is quickly brought into the family business of architectural salvaging. The lithe and sprightly Griffin is the ideal partner to help steal architectural sculptures, including gargoyles, off the faces of buildings.
“Gill, who is a noted expert on historical architecture, brings a DeLillo-like eye for detail to his descriptions of the city while also perfectly capturing the father-son relationship in all its warmth, hero-worship, and, ultimately, disappointment.
“A bildungsroman rich with symbolism, wistful memory, and unabashed longing, this is a remarkably tender love letter to a city and imaginative fiction par excellence.”
—Bill Kelly, in a starred review for BOOKLIST

“A wonderful, compelling debut.
In the spirit of Jonathan Lethem and J. D. Salinger, John Freeman Gill strips the mask off New York City in this poignant, incisive, irreverent novel about fatherhood, art, obsession, creation, and destruction. This novel salvages so many things, not least our abiding relationship with the past.” —Colum McCann

“Extraordinary.
The Gargoyle Hunters is wonderful, strong, funny, with yards and yards of beautiful writing. Its pages are full of reading pleasures.” —Annie Proulx 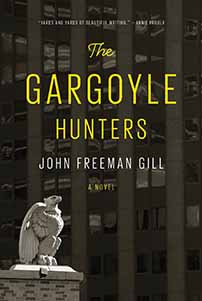