WHAT: THE BLOOD TELEGRAM:
Nixon, Kissinger, and a Forgotten Genocide

WHERE: US, India, Pakistan, Bangladesh.

WHY:
“One of the worst moments of moral blindness in US foreign policy.
“Bass examines how two powerful democracies—India and the U.S.—responded to genocidal violence in what is now Bangladesh in 1971. The systematic atrocities committed by Pakistanis against Bengalis, and the major refugee crisis that accompanied it, would eventually drive India to war against Pakistan. The U.S. not only did not intervene; in fact, it supported the Pakistani regime in what Bass identifies as ‘one of the worst moments of moral blindness in U.S. foreign policy.’
“This was not, argues Bass, mere passivity. Rather, it was a series of deliberate choices made by Nixon and Kissinger: to ignore the hundreds of thousands killed; to downplay the emerging humanitarian crisis; to continue to supply Pakistan with U.S. weapons and military supplies despite evidence that they were being used against Bengali civilians; to disregard warnings from their own legal advisors. Nixon and Kissinger’s rationale, suggests Bass, was partly coldly strategic; Pakistan was a Cold War ally and was secretly facilitating their much-coveted opening to China. But, as made clear in comments captured on White House tapes, ugly anti-Indian bigotry played a role as well.
“Bass presents his evidence with devastating clarity and does not pull his punches: though India’s motives may have been mixed, the U.S. had Bengali blood on its hands. Reexamining a largely overlooked genocide, this book also serves as a reminder of the complicated costs paid for Nixon’s lauded trip to China.”
—Brendan Driscoll, in a starred review for BOOKLIST 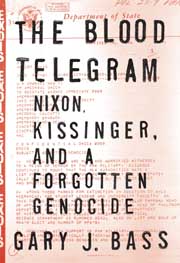 “A deeply incisive lesson for today’s leaders and electorate. In this tremendously lucid analysis, Bass reveals the cold cunning of all sides in the face of the killing and fleeing of millions of refugees into India, including Indira Gandhi, who turned the humanitarian disaster into political profit. By revisiting these tapes and primary sources, Bass holds these leaders to a much-needed reckoning.” —KIRKUS, starred review