Posts Tagged ‘Girl who takes an eye for an eye’

Media Center: ‘Girl Who Takes an Eye for an Eye’ by David Lagercrantz

WHAT: THE GIRL WHO TAKES AN EYE FOR AN EYE, a novel

WHERE: The story is set in Sweden.

WHY: “The legacy of Lisbeth Salander lives on.
“Once again, Lagercrantz succeeds in carefully staying true to the framework created by the late Stieg Larsson in his original trilogy, and fans can continue to follow their favorite hacker heroine from obscurity to notoriety to unsought fame and unwanted attention.
“Through all Salander’s struggles, she exudes stalwart integrity, razor-like methods, and a concealed past. Here readers find Salander in a maximum-security prison serving a two-month sentence for the unlawful use of property and reckless endangerment following the events of The Girl in the Spider’s Web. She deftly uses her time in prison to challenge the violent power structure that has been allowed to grow among the block’s inmates by the inattentive prison organization. Never one to let a bully have unchecked authority on those least able to protect themselves, Salander targets the leader of the prison’s gang for regularly beating up Bangledeshi inmate Faria Kazi, who has been convicted of murdering her brother.
“Lagercrantz never eases on the pace as seemingly disparate characters are introduced and cross-connected and plot elements multiply. Aspects of Salander’s shrouded past are revealed yet again in the wake of a personal tragedy. It’s revealed that a registry created to study the effects on twins separated at birth has ill intentions. The financial markets are disrupted by malevolent hacking, and, as always, the one to record and expose the unfettered truth is Mikael Blomkvist, editor of Sweden’s venerated broadside, Millennium.
“In this new world where everything is suspect, including proclaimed facts, it is the dragons that protect and avenge the downtrodden.”
–Michael Ruzicka, in a starred review for BOOKLIST

“One thing that anyone who’s crossed paths with Lisbeth Salander should have learned by now is that it’s best not to cross paths with her at all.”
–KIRKUS REVIEWS 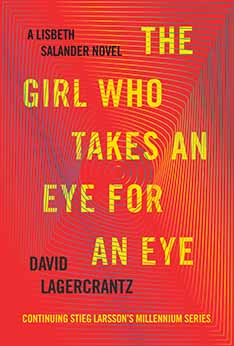