WHAT: THE GLASS HOTEL, a novel

WHY: “A gorgeously rendered tragedy.
“Emily St. John Mandel follows her breakout dystopian hit, Station Eleven, with another tale of wanderers whose fates are interconnected, this time by a Ponzi scheme rather than the demise of most of the world’s population.
“Beautiful young bartender Vincent Smith has no illusions about the relationship she enters into with Jonathan Alkaitis, an uber-wealthy investor more than twice her age. Vincent leaves her job at the remote Hotel Caiette to move into Jonathan’s mansion in Connecticut and pretend to be his wife, attending dinners with his investors. Mandel reveals early on that Jonathan’s business dealings aren’t above board, but even with this information front and center, she still manages to build nail-biting tension as things start to go wrong for Jonathan and is associates.
“Mandel weaves an intricate spider web of a story, connecting the people whom Jonathan and Vincent’s lives touch and irrevocably change, from Vincent’s feckless brother to the small group of colleagues abetting Jonathan’s scheme to the people whose fortunes are decimated by Jonathan’s machinations.
“The phenomenal success of Station Eleven has set high expectations for Mandel’s new novel, and both books have been optioned for television series.”
—Kristine Huntley, in a starred review for BOOKLIST

“A strange, subtle, and haunting novel.
“In luminous prose, Mandel shows how easy it is to become caught in a web of unintended consequences and how disastrous it can be when such fragile bonds shatter under pressure.” —KIRKUS, a starred review

“With superb writing and an intricately connected plot that ticks along like clockwork, Mandel offers an unnerving critique of the twinned modern plagues of income inequality and cynical opportunism.”
—Reba Leiding, in a starred review for LIBRARY JOURNAL

“This ingenious, enthralling novel probes the tenuous yet unbreakable bonds between people and the lasting effects of momentary carelessness.”
—PUBLISHERS WEEKLY, a starred review 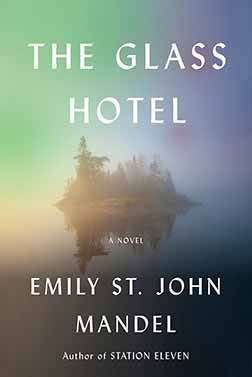