WHAT: WHITE TEARS, a novel

WHY: “A fast-paced, hallucinatory book written in extraordinary prose.
“The excellent new novel from Kunzru opens as a coming-of-age yarn and ends as a ghost story, but its real subject is a vital piece of American history: the persistence of cultural appropriation in popular music.
“Twenty-something white roommates Carter and Seth are audiophiles, record collectors, and budding producers living in New York. They’re obsessed with black music, whether it’s reggae, jazz, funk, or hip-hop. When Seth records an old chess player in the park, Carter remixes it into a counterfeit blues song and markets the record as the work of an obscure black singer named Charlie Shaw. Almost immediately, they are approached by a mysterious collector who insists that Shaw is real—and after Carter is savagely beaten and left in a coma, Seth begins to discover just how real.
“With Carter’s sister, Leonie, for whom Seth nurses an unrequited crush, Seth undertakes a perilous journey from New York to Mississippi to unravel a mystery that weaves together the blues, obsessive collectors, and the American South. What he finds is murder and the unquiet ghost of Shaw.
“White Tears is a fast-paced, hallucinatory book written in extraordinary prose, but it’s also perhaps the ultimate literary treatment of the so-called hipster, tracing the roots of the urban bedroom deejay to the mythic blues troubadours of the antebellum South. In his most accessible book to date, Kunzru takes on the vinyl-digging gentrification culture with a historical conscience.” —PUBLISHERS WEEKLY, starred review

“A smart, time-bending tale about cultural appropriation.
Kunzru has done his homework on racial history and white privilege, but this novel is also lifted on his sharp descriptions of music, which he makes so concrete and delectable you understand why his misguided, ill-fated heroes fall so hard for it. A well-turned and innovative tale that cannily connect old-time blues and modern-day minstrelsy.” —KIRKUS REVIEWS 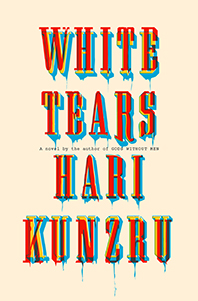