Media Center: ‘How to Survive a Plague’ by David France

WHAT: HOW TO SURVIVE A PLAGUE:
The Inside Story of How Citizens and Science Tamed AIDS

WHY: “Spectacular and soulful…
France brilliantly chronicles AIDS in America
during the 1980s and 1990s.
“Safe sex, the rainbow motif, AZT and protease inhibitors, GLAAD, scientific squabbles, Ryan White, CD4s, and the AIDS Memorial Quilt…
“This powerful account captures the turbulence and the emotions — hope, despair, anger, loss, betrayal, abandonment, terror — that gripped those infected and those not. France concludes, ‘Nobody left those years uncorrupted.’ He focuses on the heroes of the epidemic, primarily AIDS activists whose names are mostly unknown to the general public. Groups (such as the ACT-UP, the AIDS Coalition to Unleash Power) and individuals alike committed themselves to political advocacy, community outreach (self-help programs and education), fundraising for research, and protest. Their battle wasn’t only against the complex, rapidly mutating HIV retrovirus that melted immune systems and destroyed lives (mostly young gay men) but also ignorance, prejudice, and fear.
“France identifies ‘the foul truths that a microscopic virus had revealed about American culture: politicians who welcomed the plague as proof of God’s will, doctors who refused the victims medical care, ministers and often even parents themselves who withheld all but a shiver of grief.’
“American history, memoir, public health, and a call-to-action are perfectly and passionately blended here.”
—Tony Miksanek, in a starred review for BOOKLIST

“Lucid and urgent…A fine work of social history.
“It may be hard for anyone not alive at the time to comprehend how devastatingly the AIDS epidemic announced itself in the early 1980s and how resolute the Ronald Reagan government was in doing nothing about it…While the long battle exhausted many,it was also extraordinarily effective in rallying both public and scientific/medical support. The result was a transformation of the disease — not just a physical one, with medications developed and made available that could ‘regenerate a person’s immune system,’ but also a social one, with much of the stigma lifted from the ill. All this, as the author notes in closing, was accomplished by angry, vocal people out in the streets — a very good lesson for activists engaged in other issues today.”
—KIRKUS REVIEWS

“Prepare to have your heart buoyed and broken
in this riveting account of the response to the AIDS epidemic
that’s as educational as it is difficult to put down.”
—Susanne Caro, in a starred review for LIBRARY JOURNAL 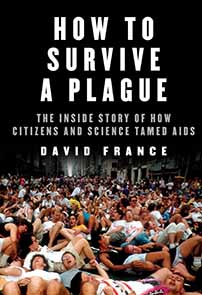