WHY: “A shockingly original exploration of class, race, and systemic violence.
“The lines from the opening paragraph of Francesca Momplaisir’s debut give the reader a sense of the shocks to come in this strange, disturbing novel. The home that’s on fire is not only conscious and willful; it’s also a central character in the narrative. Those parenthetical, half-hidden references to the basement give us the first hint of the gruesome revelations to come.
“This house, tainted by the human evil it contains, is reminiscent of the opening line of Toni Morrison’s Beloved: ‘124 was spiteful. Full of a baby’s venom. The women in the house knew it and so did the children.’ And, like Morrison, Momplaisir uses the tropes of fantasy to try to assert truths that ordinary language and realistic imagery cannot communicate. Morrison compelled readers to confront American slavery and its aftermath. Momplaisir addresses both the legacy of colonialism in Haiti and the immigrant experience in the United States.
“The man who drives the House to self-immolate is Lucien, a ne’er-do-well who doesn’t live up to the promise his light skin and expensive education suggest. He is obsessed with Marie-Ange, who, as a general’s daughter, is out of reach — until her father runs afoul of President Duvalier. Lucien expects a bright future for his wife and their daughters when they eventually move to New York, but the success he wants still eludes him in a community that only grudgingly makes room for an influx of Haitians resettling in Queens. Lucien satisfies himself by indulging his darkest needs.
“Momplaisir’s unflinching depiction of the horrors white supremacy has wrought is powerful. Her debut introduces her as an author to watch.” —KIRKUS REVIEWS 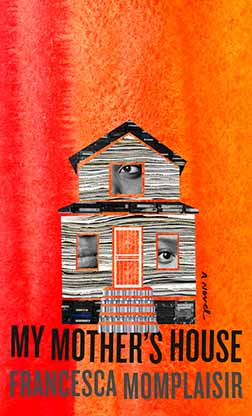