WHAT: LOVE AND TREASURE, a novel

WHY: “A sensitive and heartbreaking portrayal
of love, politics, and family secrets.”
—Mariel Pachucki, LIBRARY JOURNAL

“A seductive reflection on just how complicated the idea of ‘home’ is
— and why it is worth more than treasure.” —PUBLISHERS WEEKLY

“Fascinating and provocative.
“Classics scholar Jack Wiseman, in the last throes of pancreatic cancer, entrusts an enamel locket to his granddaughter, imploring her to find the rightful owner. It’s the only thing he’s ever asked of her. During WWII, Jack had been a soldier in charge of storing the possessions found on ‘the gold train,’ which contained the accumulated wealth of Hungarian Jews who had been shipped off to concentration camps. The contents were all meticulously accounted for. But who was there to receive them? The responsibility weighed heavily on Jack, not least because of his involvement with Ilona, a survivor whose shockingly black sense of humor both upsets and entrances him.
“As Waldman takes us back to Hungary, first in the aftermath of the war, then to the years preceding it, she evokes what it feels like to have your identity and your community stripped from you and how impossibly foolish it can be to think your personal destiny is within your control. With its complicated politics and moral ambiguity, this provocative novel tells a fascinating story.”
—Joanne Wilkinson, BOOKLIST 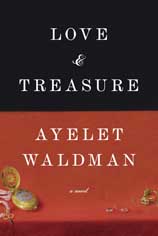 From the beginning of the book: Jack Wiseman, immersed as ever in the pages of a book, did not notice the arrival of the bus until alerted by the stir among the other people waiting in the overheated station lounge. The pugnacious chin he aimed at the coach’s windows had a bit of Kleenex clinging to it, printed with a comma of blood, and his starched and ironed shirt gaped at the collar, revealing pleats in the drapery of his neck and a thick white thatch of fur on his chest. He squinted, caught a glimpse of the glory of his granddaughter’s hair, and pulled himself to his feet. He tore a corner from the back page of somebody’s discarded Ellsworth American and tucked it between the pages of his old Loeb edition of Herodotus, measuring with a rueful snort the remaining unread inches. He had never been a man to leave a job unfinished, a fact on which he supposed he must have been relying, perhaps unconsciously, in undertaking to reread, for what must be the eighth or ninth time, this most garrulous of classical historians.