Posts Tagged ‘I Think You Are Totally Wrong’

WHO: David Shields and Caleb Powell

WHAT: I THINK YOU’RE TOTALLY WRONG:
A Quarrel

WHERE: The authors live in Seattle.

WHY: “A stimulating intellectual interaction with lots of heart.
“Two writers—one successful, the other still working on it—venture into the woods over the course of four days with one objective in mind: Argue so well that people will want to read about it.
“Years ago, before traveling the world and teaching ESL, Powell was a scruffy kid with long hair and a mustache sitting in Shields’ writing class, mulling over a life of letters. Flash forward to today, and the same intellectual writer has become a stay-at-home father, but one who still earnestly cultivates his art. The older man, meanwhile, has quietly spent the intervening years maintaining a steady, successful course in academia.
“So, which one has suffered and sacrificed more for the written word, and which one is the more successful human, effectively managing to keep himself directly involved in the flow of life? The answer to that question represents the heart of the writers’ multifaceted dialogue. Getting there, however, is just as interesting as the two men discuss everything from My Dinner with Andre to sports radio to George W. Bush. They also pepper their discussion with ruthless critiques of each other’s works.
“While the intellectual discourse is largely dispassionate, it never comes across as bloodless, with both men subtly revealing profound aspects of their souls during the course of their galloping discourse. Of course, they delve deeply into stuffy literary criticism, as well, but that’s balanced by a deep sense of how each man feels about fatherhood, friendship, mortality and women.” –KIRKUS REVIEWS

“Shields and Powell approach their topics with clarity and wit, they poke and prod, they agree and disagree…an often contentious and always intelligent dialogue.” –Mark Levine, BOOKLIST

*James Franco’s adaptation of this book into a film, with Shields and Powell striving mightily to play themselves and Franco in a supporting role, will be released in 2015.

From the beginning of the book:

David Shields: Where do you want me to put my stuff?

Caleb: Back of my car. I’m looking forward to this.

David: Definitely, but did you see the article in the [University of Washington] Daily?

David: (pulling the article on his phone) I must admit I’m a bit flummoxed by your quote.

Caleb: (reading the article) Hmm. I don’t see the big deal. She asked me my first impressions of you, and I told her.

David: Do you feel that much animosity toward me, or am I completely imagining it?

David: There’s hardly a line of yours whose purpose was to do anything but to undermine me.

Caleb: You mean when I said, “Your class wasted time”? I went on to praise you, but she didn’t quote that, of course. And your novel class did waste time — endlessly dissecting Ted Mooney’s Easy Travel to Other Planets and Marilynne Robinson’s Housekeeping.

Caleb: Come in and meet my family.

David Shields is the author of thirteen previous books, including Reality Hunger (named one of the best books of 2010 by more than thirty publications), The Thing About Life Is That One Day You’ll Be Dead (New York Times bestseller), Black Planet (National Book Critics Circle Award finalist), and Remote (winner of the PEN/Revson Award). He has published essays and stories in numerous periodicals, including The New York Times Magazine, Harper’s, Yale Review, The Village Voice, Salon, Slate, McSweeney’s, and The Believer. His work has been translated into fifteen languages.

Caleb Powell, who grew up in the Pacific Northwest, has played bass in a band, worked construction, and spent ten years teaching ESL and studying foreign languages on six continents. Now a stay-at-home father in Seattle, he has published stories and essays in descant, Post Road, and ZYZZYVA. 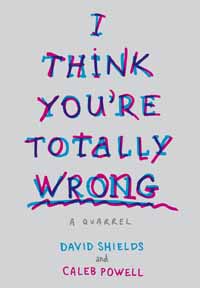