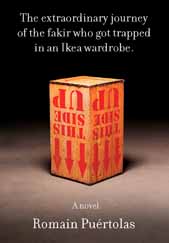 Tags: Extraordinary Journey of the Fakir Who Got Trapped in an Ikea Wardrobe, fakir, Grand Prix Jules Verne, Ikea wardrobe, Knopf, Novel, Romain Puertolas
Posted in Media Center, Not on Homepage | No Comments »