Media Center: ‘Crisis of the Middle-Class Constitution’ by Ganesh Sitaraman

WHAT: THE CRISIS OF
THE MIDDLE-CLASS CONSTITUTION:
Why Income Inequality Threatens Our Republic

WHY: “A blend of accessible
economic theory and practical reform.
“The declining middle class represents not just a lost economic stratum, but the disappeared basis for the quaint idea of representative democracy. Rome, Venice, Great Britain: the first republics had their legal footings in constitutions premised on class warfare. By that outlook, a Hobbesian war of each against all pitted the interests of rich against poor, with not much to buffer the two.
“The genius of the American Constitution, writes Sitaraman, is that it ‘assumes relative economic equality in society [and] assumes that the middle class is and will remain dominant.’ Thus, he adds, the Constitution does not preclude the poor from entering, say, the Senate, even though practical reality may not encourage them. Yet, as he also notes, particularly in the years since the Great Recession, markers of inequality have become ever more pronounced; the government seems structured to benefit the interests of the wealthy at the expense of the poor, and the middle class is being squeezed.
“An adviser to Elizabeth Warren, and therefore on the left end of the left wing, Sitaraman is a proponent of government as an engine for economic reform. As he argues, it was government programs such as the GI Bill and modest home loans that built a strong middle class in the first place, a strong bulwark against the temptations of communism. In the new siege of the middle class on the part of the wealthy, he urges, the old fears of too much power in the hands of the government ought to be replaced by old but dormant fears of power in the hands of the very wealthy. Now, with ‘power increasingly concentrated in the hands of economic elites,’ the reality is squarely back in that class warfare that the Founders so desperately wanted to transcend.
“A blend of accessible economic theory and practical reform, of much interest to any reader whose common cause is with the 99 rather than the 1 percent.”
—KIRKUS REVIEWS

“Ganesh Sitaraman is a bold and visionary thinker.
The Crisis of the Middle Class Constitution shows that the disappearing American dream is more than a policy problem — it is a constitutional crisis. In our age of growing inequality, the stakes couldn’t be higher. Every American needs to read this book.”
—Senator Elizabeth Warren

“This beautifully written and powerfully argued book will change the discourse of constitutionalism — for the better.”
—Lawrence Lessig, Harvard Law School

“A pathbreaking effort to rethink the past, present, and future of American constitutional development.” —Bruce Ackerman, Yale University

“A brilliantly inventive argument, especially sobering in light of the populism of the right and the left during the last presidential election.”
—David K. Shipler, author of The Working Poor

“In his timely and important book, Ganesh Sitaraman makes a strong case that economic fairness is a constitutional principle, and that if we give up on it, we will have given up on our democracy altogether. In making this argument, he gives readers a powerful and useful narration of the long American struggle for genuine self-government. He also pays close and valuable attention to the concrete reforms that can move us closer to real democracy.” —Jedediah Purdy, Duke University School of Law 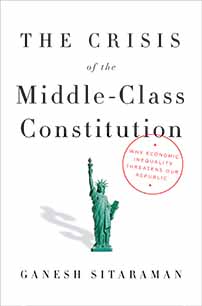