WHAT: JANE AUSTEN, THE SECRET RADICAL

WHERE: The author is a professor of classics and English Literature at Oxford.

WHY: “A fine-grained study that shows us how to read between the lines to discover the remarkable woman who helped transform the novel from trash to an absolute art form.
“In her debut book, Helena Kelly amply shows her deep research into some of the lesser-known elements of Jane Austen’s life and work. The author’s close attention to the period’s history supports her assertion that her subject was a radical. Austen’s readers must remember that during her lifetime, England was at war with France and was essentially a totalitarian state; habeas corpus was suspended, and treason was redefined in the strictest and most frightening terms. At the time, Austen was one of the only novelists to consider current events in her work. She never resorted to grand heroes or wicked villains, dealing instead with society’s ills—not least of all women’s rights, which were nearly nonexistent.
“In Sense and Sensibility, Austen alludes to Mary Wollstonecraft’s A Vindication of the Rights of Woman and decries women’s reliance on the kindness of relatives to provide for them. Slavery, especially as dealt with in Mansfield Park, receives the full Austen treatment with quotations from abolitionist writers, subtle character names, and mind manipulation. However, slavery was not Austen’s only target. Also in Mansfield, the author attacks the Church of England for enclosures of common land, pluralism, and outright ownership of slaves. In both Emma and Pride and Prejudice, Austen challenges the then-strict societal norms, particularly regarding introductions. Elizabeth Bennett shows her radicalism, deciding things for herself and tolerating authority only as far as it suits her.
“In dissecting Austen’s feelings on parents, especially fathers, sexuality, and 19th-century life, Kelly exposes a depth beyond what at first may seem to be silly characters.” —KIRKUS REVIEWS

PRAISE FROM THE UK:

“Meticulously researched…
Through a combination of beautifully precise close readings alongside Austen’s biographical, literary and historical context, Kelly shows us that the novels were about nothing more or less than the burning political questions of the day…A deeply welcome book. Kelly has produced a sublime piece of literary detective work that shows us once and for all how to be precisely the sort of reader that Austen deserves.”
—Caroline Criado-Perez, NEW REVIEW

“You’ll definitely see Austen’s works differently from now on.
Kelly takes the author’s catalogue of works, much adapted, much loved, and turns them upside down, shaking out the petticoats and love stories to find a dark, politically motivated underbelly.” —Ella Walker, PRESS AND JOURNAL

“A bodice-burstingly brilliant book…
Essential…What this radical re-reading of the novels does so brilliantly is to exhort us all to chuck out the chintz, and the teacups, and all the traditional romantic notions about Austen’s work that have been fed to us for so long…However well you think you know the novels, you’ll be raring to read them again once you’ve read this.”
—Caroline Sanderson, BOOKSELLER 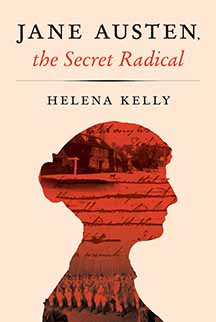