WHAT: SOME LUCK, a novel

WHY: “This grand, assured, quietly heroic, and affecting novel is a supremely nuanced portrait of a family spanning three pivotal American decades.
“Smiley was awarded the Pulitzer Prize for A Thousand Acres, a novel about a farming family in Iowa. In her fourteenth novel, she returns to that fertile ground to tell the stories of the Langdons, a clan deeply in accord with the land, wherever their quests lead them. A seductive writer in perfect command of every element of language, Smiley sets a ruminative pace embodying the tempo of farm work, season to season.
“Beginning in 1920 and reaching 1953, this saga of the vicissitudes of luck and our futile efforts to control it is also a richly meteorological novel, exploring how the high and low pressures of the mind can determine a farm’s bounty and losses just as droughts and blizzards do. While steadfast Walter worries, his smart, industrious wife, Rosanna, runs the household and cares for their children, beginning with courageous Frankie, followed by animal-lover Joey, romantic Lillian, scholarly Henry, and good Claire.
“As barbed in her wit as ever, Smiley is also munificently tender. The Langdons endure the Depression, Walter agonizes over giving up his trusty horses for a tractor, and Joe tries the new synthetic fertilizers. Then, as Frank serves in WWII and, covertly, the Cold War, the novel’s velocity, intensity, and wonder redouble.”
—Donna Seaman, in a starred review for BOOKLIST

“An expansive, episodic tale.
Smiley is the least sentimental of writers, but when Rosanna and Walter look at the 23 people gathered at Thanksgiving in 1948 and ‘agreed in an instant: something had created itself from nothing,’ it’s a moment of honest sentiment, honestly earned.”
—KIRKUS, a starred review 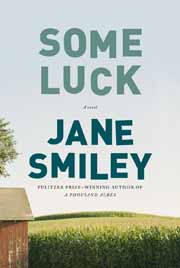