WHAT: THE HEATHEN SCHOOL: A Story of Hope and Betrayal in the Age of the Early Republic

WHERE: Set in Cornwall, CT.

“A carefully constructed study—featuring a chilling denouement.
“Demos manages a sly, significant feat in this historical study/personal exploration. As part of a grandiose scheme to redeem and improve the status of ‘savages’ such as American Indians, the early Americans devised a ‘heathen school’ in Cornwall, Conn., for some of the exemplary members of various ethnic groups, beginning with five Pacific Islanders brought to the shores by trade ships.
“The Hawaiian native Henry Obookiah proved the most famous immigrant, having arrived around 1809, eager to be educated, Christianized and sheltered with Yale faculty. Eventually, the American Board of Commissioners for Foreign Missions sponsored him, along with the other Hawaiians, for the Foreign Mission School, inaugurated in 1817. The school was run by philanthropic donations, and it taught a mix of English, arithmetic and geography, for the eventual purpose of conversion and evangelization.
“Gaining new students from some of the Indian nations, East Asia and elsewhere, the school helped undermine some of the stereotypes about the intelligence of ‘pagans’ and served as a model experiment as well as a tourist attraction. However, the seeds of its success, namely assimilation and acculturation, also led to its downfall, as the ‘scholars’ attracted white women partners and, thereby, scandal amid a deeply racist America.
“The two success stories, involving Cherokee scholars John Ridge and Elias Boudinot, both married white women and moved to the Cherokee Nation, gaining important leadership roles that, ultimately, steered the nation’s fate toward removal and thereby invited the men’s own violent demises.
“A slow-building saga that delivers a powerful final wallop.” —KIRKUS, a starred review

“A poignant, well-researched historical vignette of how changing the world weighs on the individual shoulders bearing the task.” —Gilbert Taylor, BOOKLIST 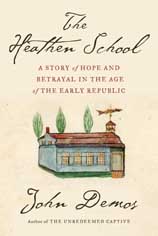 From the beginning of the book: With their Revolution completed, their Constitution written, their nation established, the self-styled Americans faced the world in a fundamentally altered posture. Throughout the preceding two centuries, they had been colonists—and thus, in a broad sense, dependents. They had absorbed from elsewhere regular infusions of migrants, of “goods,” of cultural nourishment and guidance.
But henceforth the currents would flow, also, in reverse direction. The new United States would increasingly—sometimes aggressively—turn out toward other groups and places. It would proudly proclaim its republican credo as a “beacon of freedom” for political reformers around the world. It would proffer its “go-ahead” spirit as the key to social development. It would urge its highly charged version of Protestant Christianity on all sorts of “heathen” unbelievers. Moreover, its people would rapidly multiply their physical contacts with the rest of humankind. Especially after about 1800, their travel and commerce would extend, quite literally, to the farthest corners of the earth.