WHERE: The author was born in Swansea in the UK and now lives in Brooklyn.

WHY: “Literate, perspicacious,
and thoroughly entertaining.
“A sharp, witty collection from the prolific writer of fiction, memoir, and acerbic essays. In his latest work of nonfiction, Martin Amis gathers an enticing miscellany of short pieces—reportage, political and cultural commentary, book reviews, and personal reflections—published during the past 30 years, amended with occasional footnotes and postscripts and, writes the author, given ‘a great deal of polishing.’
“In an affectionate piece on The King’s English, his father’s last book, on language and usage, Amis quotes a reviewer who admired the ‘tense, sly quality’ of Kingsley Amis’s prose. Certainly that slyness and linguistic precision has been inherited by Amis fils, whether he is praising the ‘invigorating intelligence’ of Jane Austen or skewering the bumbling Rick Perry, recalling debonair Saul Bellow or denigrating narcissistic Donald Trump.
“Describing himself as ‘pallidly left-of-center,’ Amis reported on the Republican Party for Newsweek in 2011 and 2012 (calling Romney ‘an astoundingly proficient technocrat’). In 2016, he weighed in on Trump’s ascension for Harper’s, deeming his campaign manifesto, Crippled America, ’emotionally primitive and intellectually barbaric’; and Trump himself, ‘insecurity incarnate’ and, like the majority of Republicans, ‘a xenophobe and proud of it.’ Trump’s ‘idiolect,’ writes the author, would serve as ‘an adventure playground for any proscriptive linguist.’
“Among essays on writers, Amis warmly remembers the brilliant, eccentric Iris Murdoch, ‘the preeminent female English novelist of her generation,’ and poet Philip Larkin, ‘more than memorable. He is instantly unforgettable.’ Amis also offers a tender eulogy for Princess Diana, whose death, he writes, felt ‘so savage.’ Diana had a particular talent ‘for love. She felt that she could inspire it, transmit it, increase its general sum,’ and she both humanized and, finally, cracked the veneer of the monarchy. John Travolta, Philip Roth, Christopher Hitchens, and Jeremy Corbyn all come under Amis’ sharp-eyed gaze.” –KIRKUS REVIEWS

“A vital, heady, landmark compendium.
“Amis writes with buoyant and cutting authority. His vocabulary, cross-pollinated by his trans-Atlantic reading and life, is pinpoint and peppery; his syntax supple and ensnaring. The pleasure Amis takes in observation, cogitation, and composition is palpable, and he is acidly funny. His literary analysis, including of Don DeLillo, ‘the laureate of terror,’ is commanding and enlightening, while he brings his novelist’s sensibility to politics, especially in his unnervingly prescient assessment of Trump’s wobbly mental health during the 2016 campaign. In considering Vegas, tennis, Jane Austen films, and personal milestones, Amis writes with agility, spirit, artistry, and a shrewd sense of the deepest implications.” –Donna Seaman, BOOKLIST

“Amis is infallibly a lucid, linguistically precise commentator
…he is an inimitable, devoted observer.” –PUBLISHERS WEEKLY

“He is a savvy and biting writer.” –Doug Diesenhaus, LIBRARY JOURNAL

By Way of an Introduction
He’s Leaving Home

Twin Peaks 1
Vladimir Nabokov and the Problem from Hell
Saul Bellow, as Opposed to Henry James

The House of Windsor
Princess Diana: A Mirror, Not a Lamp
The Queen’s Speech, the Queen’s Heart

More Personal 1
You Ask the Questions 1
The Fourth Estate and the Puzzle of Heredity
On the Road: The Multicity Book Tour
The King’s English

Sport
Three Stabs at Tennis
The Champions League Final, 1999
In Search of Dieguito Maradona
On the Court: My Beautiful Game

Politics 2
Ivan Is Introduced to the USSR: All Together Now
Is Terrorism “About Religion”?
In Memory of Neda Soltan, 1983–2009: Iran
The Crippled Murderers of Cali, Colombia 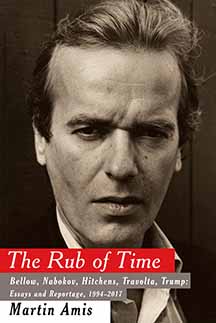