WHY: “A discerning, richly detailed inquiry into America’s complex political and philosophical legacy.
“A lucid and authoritative examination of America’s tumultuous beginnings, when the Founding Fathers grappled with issues of race, income inequality, law, and foreign policy — all issues that still vex the nation.
“Believing that history is ‘an ongoing conversation between past and present,’ the author asks what Jefferson, Washington, Madison, and Adams can teach us today. ‘What did “all men are created equal” mean then and now? Did the “pursuit of happiness” imply the right to some semblance of economic equality? Does it now?’
“These and other salient questions inform Ellis’ vivid depiction of the controversies swirling as the Constitution was drafted and ratified. The Founders were men of deep contradictions and evolving political views. As a young man, for example, Jefferson ‘insisted that the central principles of the American Revolution were inherently incompatible with slavery.’ The older Jefferson, who owned hundreds of slaves and fathered many children with his slave Sally Hemings, fervently believed that races should not mix. Slaves should be freed, he conceded, and then sent to the unpopulated West, Santo Domingo, or Liberia.
“As to equality, the Founders ‘were a self-conscious elite’ who did not value ‘the innate wisdom of the common man.’ John Adams’ ‘prognosis for the American future was a plutocratic aristocracy.’ Freedom to pursue wealth, he asserted, ‘essentially ensured the triumph of inequality.’
“Ellis places Washington’s famous warning against foreign entanglements in the context of westward expansion, Native American removal, and postwar negotiations. Most fascinating is the author’s cogent critique of constitutional originalists, intent on recovering ‘the mentality and language of the framers on their own terms in their own time.'” –KIRKUS, a starred review 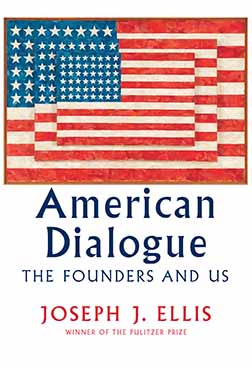