WHAT: THE OUTLAW OCEAN:
Journeys Across the Last Untamed Frontier

WHY: “An exposé of immense magnitude and consequence.
“‘We know shockingly little about the sea,’ states Urbina, who proves his assertion many times over in this tour de force of intrepid global inquiry. The crimes committed on the high seas run a horrifying gamut of enslavement, poaching, torture, murder, piracy, and environmental decimation, all stoked by fraud and corruption.
“Urbina witnessed such outrages at tremendous personal risk, often aboard filthy illegal fishing boats manned by captive and abused workers. He illuminates the many loopholes through which profiteers maneuver in this realm of ruthlessness and impunity, where young Asian men are trapped into debt bondage, bought and sold, forced into dangerous and debilitating labor, and brutally detained. Here, too, are profiles of a wily ship repo man, and of courageous activists trying to help ‘sea slaves’ and boldly confronting illegal fishing operations.
“With precision, drama, and intimacy, Urbina recounts his role in a dangerous at-sea standoff between Indonesian and Vietnamese authorities, a frightening escape from Somalia, and many other harrowing situations, and describes his tenuous network of sources, translators, fixers, and spies. His biggest fear is that his risky quest may do harm to people rather than good, but there is no doubt that the bravely gleaned and galvanizing facts about maritime savagery and brewing catastrophes, which he so vividly and cogently presents, coalesce into an exposé of immense magnitude and consequence.” —Donna Seaman, in a starred review for BOOKLIST

“A swift-moving, often surprising account
of the dangers that face sailors and nations alike on the lawless tide.
Urbina’s book ranks alongside those by Mark Bowden and Sebastian Junger, fraught with peril and laced with beer, the smell of sea air, and constant bouts of gaming an inept system.” —KIRKUS, a starred review

About a hundred miles off the coast of Thailand, three dozen Cambodian boys and men worked barefoot all day and into the night on the deck of a purse seiner fishing ship. Fifteen-foot swells climbed the sides of the ship, clipping the crew below the knees. Ocean spray and fish innards made the floor skating-rink slippery. Seesawing erratically from the rough seas and gale winds, the deck was an obstacle course of jagged tackle, spinning winches, and tall stacks of five-hundred-pound nets.

Rain or shine, shifts ran eighteen to twenty hours. At night, the crew cast their nets when the small silver fish they target — mostly jack mackerel and herring — were more reflective and easier to spot in darker waters. During the day, when the sun was high, temperatures topped a hundred degrees Fahrenheit, but they worked nonstop. Drinking water was tightly rationed. Most countertops were crawling with roaches. The toilet was a removable wooden floorboard on deck. At night, vermin cleaned the boys’ unwashed plates. The ship’s mangy dog barely lifted her head when the rats, which roamed on board like carefree city squirrels, ate from her bowl.

If they were not fishing, the crew sorted their catch and fixed their nets, which were prone to ripping. One boy, his shirt smudged with fish guts, proudly showed off his two missing fingers, severed by a net that had coiled around a spinning crank. Their hands, which virtually never fully dried, had open wounds, slit from fish scales and torn from the nets’ friction. The boys stitched closed the deeper cuts themselves. Infections were constant. Captains never lacked for amphetamines to help the crews work longer, but they rarely stocked antibiotics for infected wounds. 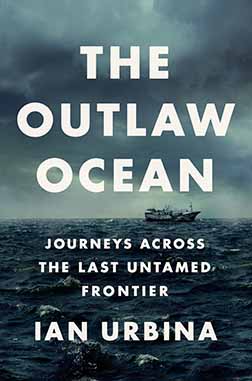