WHY: “A charmingly candid collection of stories.
“The women who populate the pages of Heiny’s disarming debut are girlfriends, mistresses and wives. They are best friends, roommates and lovers. They are intelligent but not always ambitious—keenly insightful but sometimes, perhaps willfully, blind to their own deeper desires—with loyalties and libidos that may be at odds and morals that may be in question.
“Despite the title, not all are single (or carefree or mellow), but they are all singular, and following their stories is like sitting at a dive bar tossing back deceptively pretty, surprisingly strong drinks with a pal who may not always make the best decisions but always comes away with the most colorful tales. In fact, ‘The Dive Bar’ is the title of the first story. In it, we meet Sasha, an attractive 26-year-old writer whose boyfriend has left his wife for her. After a confrontation with the boyfriend’s wife, Sasha reluctantly mulls the morality of her choices, but for her, morality is really (boringly) beside the point, and she instead finds herself sinking sideways into the next chapter of her life, a happy one, from all indications.
“Heiny’s characters often find themselves propelled through life by circumstances: The death of a beloved dog can lead inexorably to marriage, pregnancy and secret affairs, as it does for Maya, the protagonist of three of these stories, and her kind, kindred-spirit boyfriend/fiance/husband, Rhodes. Not all the women here are as appealing as Sasha and Maya, and the less we like them, the less charmed we may be by their careless misbehavior. By the end of the book—as by the end of a night at the bar with our metaphorical, engagingly louche friend—we might not find ourselves overly reluctant to part company.
“These young women are sympathetic and slyly seductive, sometimes selfish and maddeningly un-self-aware, but they are beguilingly human, and readers will yield to their charms.” —KIRKUS, a starred review

“An exceptionally humorous collection by a talented new writer…a funny and heartfelt debut.” —Lisa Block, in a starred review for LIBRARY JOURNAL 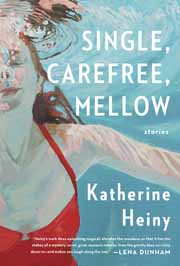 From the beginning of the book:
So picture Sasha innocently sitting alone in her apartment on a hot summer afternoon and the phone rings. She answers and a woman says, “This is Anne.”
“Who?” says Sasha.
“I think you know,” Anne says.
“Well, I don’t.” Sasha is not trying to be difficult. She honestly doesn’t know. She is trying to think of possible Annes whose voices she should recognize. Is it someone she missed an appointment with? Is this the owner of that camera she found in a cab last month and kept–
“I’m Carson’s wife,” Anne says.
Sasha says, “Oh!” And even if she sat around from now until eternity says Oh! every few seconds, she would never be able to inject it with as many layers of significance and wonder again.
“I was thinking we ought to have a drink,” Anne says. And to paraphrase Dr. Seuss, Sasha does not know quite what to say. Should she meet her for drinks? Now what should she do? Well, what would you do if your married lover’s wife asked you?