Media Center: ‘I Am Sorry to Think I Have Raised a Timid Son’ by Kent Russell

WHAT: I AM SORRY TO THINK
I HAVE RAISED A TIMID SON

WHERE: The author lives in Brooklyn

WHY: “With droll humor and sincere compassion, Russell stalwartly exposes himself, and his readers, to his past and to people longing for significance.
“Russell’s bold essay collection considers various facets of manhood, from reckless adventurer to bloodthirsty predator, sensitive protector to resolute social outcast, and ultimately he turns his journalistic lens on himself. Framed by lyrical essays surrounding Russell’s youth and his father, a Vietnam vet whose postwar purpose was to instill in his son a love of war and patriotism, the book also features Russell’s portraits of individuals who have discovered their own unorthodox form of masculinity.
“Russell pitches a tent at the Insane Clown Posse’s annual Gathering of the Juggalos, a demented festival calling for recognition and social justice. He meets Tim Friede, a Milwaukee man whose body has adapted to snakebites, as he allows his many venomous pets to prove. And Russell learns the art of terror and violence from a horror-movie makeup artist, a ruthless NHL player, and a magnate-turned-outdoorsman who has settled on an inhospitable island near Australia.” —Jonathan Fullmer, BOOKLIST

“Russell is an observant, skillful and funny writer…a type of millennial George Plimpton, the nerd conquering his fears by plunging into the unknown.”
—KIRKUS REVIEWS 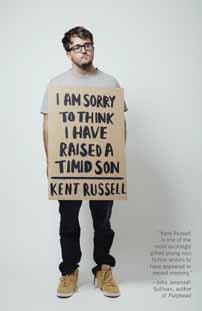 From the beginning of the book:
On my eleventh birthday, my grandfather Alexei “Papa” Romanchuck crowned me with a standard-issue M1 helmet before an audience of my friends. “You’ll grow into it,” he said when the steel pot slid past my chin. “In seven years, I’m dumping you fifty yards from Virginia Key and seeing if you can’t swim ashore with this thing on.”

Tags: I Am Sorry to Think I Have Raised a Timid Son, Kent Russell, Kent Russell author tour, Kent Russell book events, Knopf
Posted in Media Center, Not on Homepage | No Comments »