As a foreign correspondent for the Chicago Tribune, Kim Barker spent years chasing news stories across the war-torn countries of Afghanistan and Pakistan. She witnessed the conflict in the Middle East firsthand, and her experiences there gave rise to a memoir, The Taliban Shuffle, which was recently adapted into a film starring Tiny Fey called Whiskey Tango Foxtrot. Both the book and the film are undeniably humorous, but they also offer a comprehensive and sobering account of the convoluted politics at play in the region.

And while it’s impossible to condense such a complex conflict into a short history, in order to provide background for Barker’s fascinating story we’re focusing this edition of Armchair Adventurer on the complex series of events that contributed to such a volatile political atmosphere in Afghanistan.

In the author’s own words, the country was inclined toward turmoil from the very beginning:

Afghanistan was the so-called Graveyard of Empires, a pitiless mass of hard mountains and desert almost the size of Texas that had successfully repelled invaders like the Brits and the Soviets and seemed amenable only to the unforgiving people born to it. Men learned to fight like they learned to breathe, without even thinking…. They fought wars for decades until no one seemed to remember quite what they were fighting for. (p. 7)

With a long record of would-be foreign conquerors, Afghanistan has a violent history. Following hundreds of years of invasions, the country became embroiled in a conflict with Britain in the Anglo-Afghan Wars, which began in 1839 and continued, in three conflicts, until 1919, reigniting again in 2001 until 2014. In 1921, Afghanistan was finally recognized as an independent nation through the Anglo-Afghan Treaty. It then experienced several years of internal political upheaval, with power changing hands many times over—often through violent means. In 1978, leftist political parties staged a coup and established a Soviet Union–backed government, but many of Afghanistan’s more conservative Islamic leaders opposed communist ideals and revolted, setting off the Afghan War. Soon thereafter, in 1979, the Soviet Union invaded Afghanistan to enforce the struggling communist regime’s rule. They faced opposition from various anti-communist Islamic guerillas known as the mujahideen, a group backed by the U.S., Pakistan, China, Iran, and Saudi Arabia. For years the mujahideen fought the Soviets, with millions of Afghans fleeing the country to seek refuge in Pakistan and Iran.

Eventually, the mujahideen prevailed and the U.S., Pakistan, Afghanistan, and the Soviet Union signed peace accords in 1988, asserting Afghanistan’s independence. Despite the withdrawal of Soviet troops, however, the civil war continued. Dissent among the mujahideen made it difficult for the rebels to completely overthrow the communist government. Finally, in 1992, the mujahideen wrested control of the capital, only to grapple among themselves for power.

Meanwhile, a militia known as the Taliban began to emerge and gain power in the countryside. They eventually seized control of Kabul in 1996, bringing about a period of violence and suffering for ordinary Afghan citizens. The Taliban brutally enforced traditional Islamic values. Under the leadership of Osama bin Laden, the group established terrorist training camps across the country, training militants and fostering anti-American sentiment. When thousands were killed in the terrorist attack on September 11, 2001, the U.S. began to launch airstrikes in Afghanistan, eventually pushing the Taliban out of their strongholds and contributing to the collapse of the Taliban regime in December 2001. This victory led to the establishment of an interim government under Hamid Karzai that had the full support of the U.S.

Shortly thereafter, Kim Barker left for Afghanistan. Her experience would eventually be documented in The Taliban Shuffle with her customary candor and wit. Not only does Barker recount the many dangers that she and her fellow journalists faced on a daily basis, but she also introduces readers to the surprisingly lively social scene in Kabul. Against the backdrop of this simmering political landscape, Barker made a life for herself in an incredibly challenging country that she grew to love, bringing readers along for the ride:

Back then I had no idea what would actually happen. That Pakistan and Afghanistan would ultimately become more all-consuming than any relationship I had ever had. That they would slowly fall apart, and that even as they crumbled, chunk by chunk, they would feel more like home to me than anywhere else…. I would never feel as alive as when I was here. (p. 6) 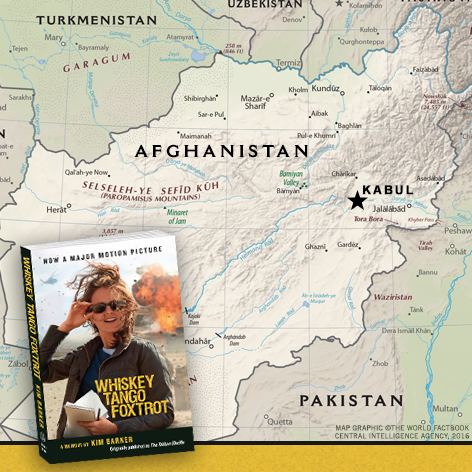