A Hannukah Feast that Would Make Joan Nathan Proud

I love the holiday season, not least because it holds the promise of starting new traditions. So, when a close friend suggested co-hosting a dinner party to celebrate Hanukkah, I jumped at the chance. It seemed only fitting that our first annual Hanukkah dinner should be a feast that would make Joan Nathan, the authority on Jewish cooking, proud. So, armed with a copy of her Jewish Holiday Cookbook (and a 5 pound piece of meat), we set to work. 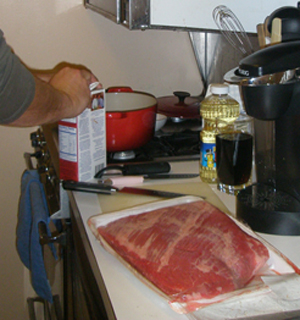 According to Joan Nathan, it takes at least 3 hours to cook a 5-pound brisket. With that in mind, we decided to cook the brisket first in order to avoid first sitting down to dinner at 10 pm. 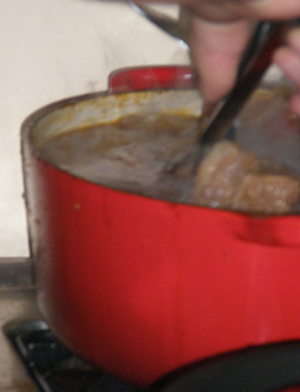 Joan suggests cooking the brisket in a 325 degree oven. Sadly, oven space was at a premium (there was Challah and desert to cook, after all). We improvised and used the stovetop instead.

Into the pot went a marinade of chili sauce, white vinegar and brown sugar. We also added beef stock for extra flavor. Then, we let it simmer. For hours. When the brisket was finally done, it was so tender that it fell apart before getting onto the serving dish. Well worth the wait. 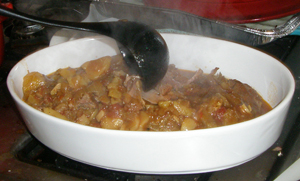 Next, we made potato latkes by onions and potatoes together. Joan suggests using russet potatoes which, because they’re so starchy, work really well. By alternately grating the onions and potatoes, as she suggested, the mixture didn’t blacken in the open air. Putting a silver utensil in the potatoes would have prevent oxidation, too. 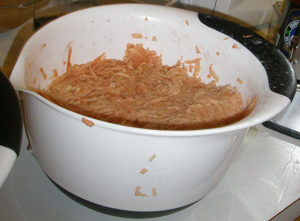 Once the potatoes and onions were grated, we added 3 medium eggs, some flour and salt and pepper to taste. Then, we were ready to fry. You can use any type of oil for the frying, although we found that peanut worked best. It held the heat well, allowing the latkes to really crisp up. 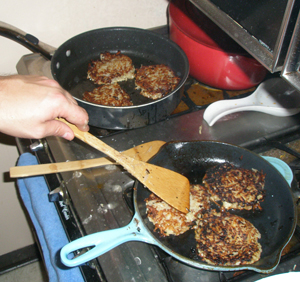 The cooked latkes should be drained on a paper towel before serving to get rid of the excess oil. The latkes freeze really well, should you have left overs. We didn’t.

A testament to Joan’s recipe and our hard work?

Perhaps, it had something to do with the fact that, despite our best intentions to the contrary, we sat down to dinner at 10. But, what a delicious dinner it was!

And, with that, a new holiday tradition is born. 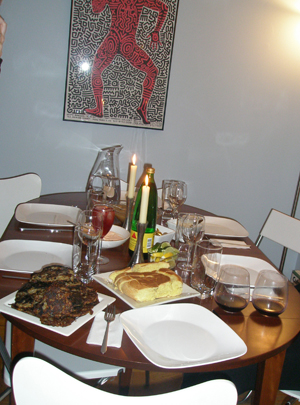