WHAT: THE STARS ARE FIRE, a novel

WHY: “A page-turner…
A suspenseful and heartwarming story of not just overcoming but also growing in the face of great difficulty.
“After the wettest spring in memory, the summer of 1947 is dry and scorching in coastal Maine. Grace welcomes the long days that allow her to get out with her two young children, but at home, they only heighten the turbulence in her struggling marriage. Life changes overnight when wildfires sweep down the coast, destroying everything in their path.
“Through a terror-filled night, Grace manages to save herself and her children, but by morning, their home is gone and her husband is missing. With little education or job experience, Grace takes a risk by moving her family to a new town and taking work where she can find it. She thrives in her new surroundings, but rebuilding one’s life does not mean that the past won’t find you.” —Cortney Ophoff, BOOKLIST

“Absolutely stunning.
Shreve’s prose mirrors the action of the fire, with popping embers of action, licks of blazing rage, and the slow burn of lyrical character development.”
–Julie Kane, in a starred review for LIBRARY JOURNAL 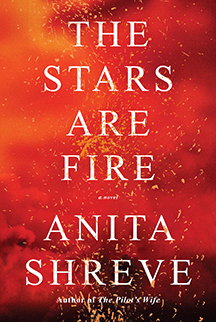