WHAT: THE DREAMT LAND:
Chasing Water and Dust Across California

WHERE: The author lives in Fresno.

WHY: “A stunning history of power, arrogance, and greed.
“Journalist, biographer, and memoirist Mark Arax offers a sweeping, engrossing history of his native California focused on the state’s use, overuse, and shocking mismanagement of water. ‘Our water wars,’ writes the author, ‘began 150 years ago, at least. What’s changed is our old nemesis drought has been joined by the new nemesis of climate change — and thirty million more people.’ Traveling ‘from one end of California to the other, from drought to flood to wildfire to mudslide,’ he chronicles in absorbing detail the transformation of the state’s Central Valley from modest seasonal farms to huge agribusinesses exporting pistachios, almonds, mandarins, and pomegranates.
“His story begins in 1769, when Father Junípero Serra, reporting to the Spanish king, combined religious fervor with sophisticated agriculture, building dams and wells and diverting streams to grow wheat, apples, citrus fruits, dates, olives, and grapes. Yet while the land yielded a bounty, the Native American laborers and converts fell victim to European diseases. ‘In the matter of a single decade,’ Arax reports, ‘tens of thousands of natives from San Francisco to Santa Barbara died from foreign germs.’
“After the demise of the Spanish missions, Mexico stepped in with ‘the first great California land grab,’ doling out thousands of acres to gentry. That land grab was hardly the last: The author offers sharply etched portraits of some of the most imperious landowners, including Johann August Sutter, who in the 1850s became the state’s ‘biggest farmer, storekeeper, innkeeper, distiller, miller, tanner, manufacturer, enslaver and liberator’; ‘cattle king’ Henry Miller, who from the mid-1800s to the early 1900s controlled more than 10 million acres, including a few rivers; and Stewart Resnick, the wealthiest farmer in America, perpetrator of clandestine deals and secret pipelines.
“Drawing on historical sources and nearly 300 interviews, Arax reveals the consequences to land and wildlife of generations of landowners who have defiantly dug, dammed, and diverted California’s waters.” –KIRKUS, starred review

“Arax brings a reporter’s precision of language, a researcher’s depth of perception, and a born storyteller’s voice to this empathetic but unsentimental look at the history, present, and uncertain future of a once-arid region restructured into one of the country’s most productive.” —PUBLISHERS WEEKLY 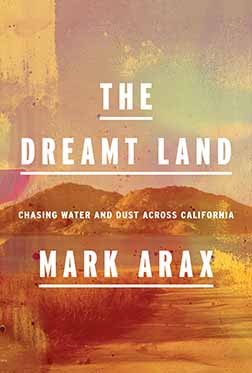