WHAT: THE MARQUIS: Lafayette Reconsidered

WHY: “Sharp and moving.
“Gilbert du Motier, aka Marquis de Lafayette (1757-1834), is one of America’s great Revolutionary heroes, but Auricchio explains the mixed reviews he received during his homeland’s revolution. Though Lafayette was a member of the nobility, as a non-Parisian, he was not readily accepted at court—until he married Adrienne de Noailles, whose family not only opened doors, but also, by their untimely deaths, left him a very rich man. When he heard of the American struggle for freedom, he knew it was his destiny to assist. His wealth and ties to France’s government helped ensure his appointment to the staff of Gen. George Washington. The attachment between him and Washington is well-documented, with the Army’s leader tempering the zeal of the young hothead.
“The real enlightenment of the man begins with Lafayette’s role in the French Revolution. Here, Auricchio picks up the devotion of the young hero as he was expecting to return to the adulation of his countrymen. His moderation served only to defeat him; even his Declaration of the Rights of Man and of the Citizen was considered too radical. At first, he was a calming factor, but neither the left nor the right accepted him; he was either too radical or too conservative. France was not a new country like America with a clean slate to build a radical new government; she relied on her traditions and royalty and rejected the idea of constitutional monarchy and, with it, Lafayette.
“A biography of the Marquis, as well as a serious study of the differences between two of the most important revolutions of the millennium. Auricchio captures the essence of the ‘French hero of the American Revolution—the Hero of Two Worlds, the Apostle of Liberty.'” —KIRKUS, a starred review

“A first-rate work that should appeal to history readers of all kinds.”
—David Keymer, in a starred review for LIBRARY JOURNAL 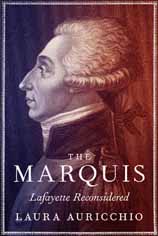 From the beginning of the book: Lafayette was born on September 6, 1757, at the Chateau de Chavaniac–an eighteen-room fortress of a home located some three hundred miles south of Paris. Built of dark, rough-hewn stones and capped with terra-cotta roof tiles, Chavaniac projects like a rocky outcropping from the volcanic hills and jagged gorges that cut through the landscape of the Auvergne. Although the chateau had been ravaged by fire in 1701 and reconstructed in the decades before Lafayette’s birth, the rebuilding made no concessions to the classical elegance that had begun altering the face of Paris in the 1500s. Instead, Chavaniac retained the squat, utilitarian character of the house erected on the site in the Middle Ages. In architecture, as in most things, change came slowly to this part of France.