WHAT: ELSA SCHIAPARELLI:
A Biography

WHERE: Author tour to New York, Philadelphia,
and Washington DC.

WHY: “An exhilarating, sympathetic,
slyly humorous, and poignant portrait.
“This consummate biographer takes readers on a breathless, madcap ride across the early 20th century. The book follows Schiaparelli from her meteoric rise to couture queen of 1930s Paris to her fizzling postwar descent into bankruptcy. It begins with the image of the child Schiaparelli running through the Italian palazzo where she grew up, and ends, no less evocatively, by musing on what passed through the designer’s mind as she sat on the terrace of her Tunisian getaway in her later years.
“In between, Secrest draws on the interviews and writings of Schiaparelli’s friends, family, and colleagues; biographers and historians of the period; public records from ship manifests and visas to FBI documents; Schiaparelli’s 1954 memoir, Shocking Life; and Secrest’s own speculative imagination. The result paints an alternately exhilarating, sympathetic, slyly humorous, and poignant portrait, not only of the surrealism-influenced, innovative fashion designer who invented wraparound dresses, built-in bras, falsies, and shocking pink, but also of the creative cauldron of Paris in its golden age between the two world wars.”
—PUBLISHERS WEEKLY

“Richly illustrated and endlessly intriguing.”
—Donna Seaman, in a starred review for BOOKLIST 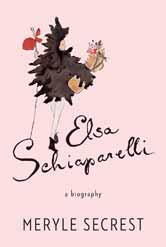 From the beginning of the book: The most extraordinary fashion designer of the twentieth century is now just a name on a perfume bottle. She is Elsa Schiaparelli, like Gabrielle Chanel a successful woman in the hierarcy of male Paris couturiers. But she was much more than a dress designer. Schiaparelli was an integral part of the whole artistic movement of the times. Her groundbreaking collaborations with such artists as Kees van Dongen, Salvador Dali, Christian Berard, Jean Cocteau, Alberto Giacometti, and Man Ray took the field of women’s wear from a business into an art form.