Posts Tagged ‘Murder by the Book’

‘Murder by the Book’ by Claire Harman

WHAT: MURDER BY THE BOOK

WHERE: The story takes place in London.

WHY: “An endlessly fascinating, bookish tale
of true crime in Victorian England.
“In May 1840, writes literary biographer Claire Harman, Londoners were shocked to learn of the gruesome killing of an ‘unobtrusive minor aristocrat whose throat was cut. The crime occurred in an era when London was full of immigrants and revolutionary and counterrevolutionary movements were roiling about, but suspicion eventually settled on Lord William Russell’s valet.
“Charles Dickens was then well embarked on his novel Barnaby Rudge, which opens with a similarly shocking if not quite so grisly murder. Though, as Harman notes, both he and a young illustrator named William Makepeace Thackeray took notice of the killing, neither could imagine how it would enfold them and other London literati. As visitors came to the site of ‘ghoulish tourism,’ so penny dreadfuls were flourishing, courtesy of the likes of Edward Bulwer’s Paul Clifford, a ‘fictionalized account of the real-life murderer Eugene Aram,’ and William Harrison Ainsworth’s Jack Sheppard, with its not ignoble but still criminal hero.
“These ‘Newgate novels’ were immensely popular, though critics deemed them ‘a class of bad books, got up for a bad public.’ They were also influential, it seems, for the valet claimed that he committed the foul deed under the sway of Ainsworth’s book. That defense didn’t quite work, writes Harman; the perp didn’t succeed in ‘offloading responsibility for his actions onto the year’s most notorious youth-corrupter’ but instead wound up at the end of a rope.
“Though full of literary implication — Bulwer, for instance, became Bulwer-Lytton, of ‘it was a dark and stormy night’ fame, while Ainsworth is forgotten — the story hangs, beg pardon, on threads of murder most foul and its sequelae: Did the valet act alone? Was Lord William already dead when his throat was slit? What dark secret lay behind the killing? Lovers of Drood, Sherlock, Jack the Ripper, and their kin real and fictional will relish the gruesome details of this entertaining book.” –KIRKUS, a starred review

“Fascinating. Harman effectively uses a novelist’s approach to recreate a now obscure 1840 English murder case that was a sensation at the time.”
–PUBLISHERS WEEKLY, a starred review 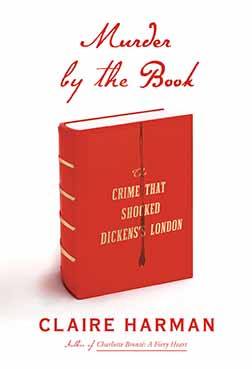