WHY: “Simultaneously humorous and deeply moving.
“In Englander’s excellent comic dissection of Jewish-American life, Larry is a secular Jew living in a goyish neighborhood in Brooklyn. When his father dies, Larry flies to Memphis to sit shivah with his Orthodox sister, Dina. She resents the fact that he doesn’t plan to spend the next year saying Kaddish — the Jewish prayer for the dead — every day to ease their father’s way into heaven. Instead, Larry goes to kaddish.com and hires someone who will do the job for him: Chemi, a religious student.
“But then, inspired by Chemi’s example, Larry undergoes a transformation. Changing his name to Shuli, he moves back to the Jewish neighborhood in Brooklyn where he grew up and becomes a teacher of Hebrew studies. Twenty years pass. Shuli feels guilty about his previous deception and decides to track down Chemi. With the help of Gavriel, a 12-year-old computer whiz, Shuli locates Chemi in Jerusalem and, after saying goodbye to his wife and children, flies to Israel to confront the stand-in of two decades past.
“This novel reads like Chaim Potok filtered through the sensibility of Mel Brooks. Englander writes cogently about Jewish-American assimilation, and, in his practiced hands, he makes Shuli’s journey, both outer and inner, a simultaneously humorous and deeply moving one.” —PUBLISHERS WEEKLY

“Englander is mischievously hilarious, nightmarish, suspenseful, and deliriously tender in this concentrated tale of tradition and improvisation, faith and love.”
—Donna Seaman, BOOKLIST

Mirrors covered and front door ajar, collar torn and sporting a shadow of beard, Larry leans against the granite top of his sister’s fancy kitchen island. He says, “Everyone’s staring at me. All of your friends.”

“That’s what people do,” Dina tells him. “They come, they say kind things, they feel uncomfortable, and they stare.”

It’s only hours after the funeral and, honestly, Larry hates himself for bringing it up. He really thought nothing could add to the despair of his father’s loss. But this, this quiet, muttering
stream of well-wishers has made it, for Larry, all the worse.

What he’s taking issue with is the look that he’s getting. It’s not the usual pained nod one naturally offers. Larry’s convinced there’s a bite to it — condemning.

He doesn’t know how he’ll survive a week trapped in his sister’s home, in his sister’s community, when every time one of the visitors glances over, Larry feels himself appraised.

And so he keeps raising his hand to the top of his head, checking for the yarmulke, sitting there like a hubcap for all its emotional weight. Its absence at his own father’s shivah would be the same as standing naked before them. 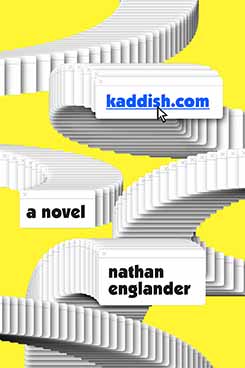