Recipe by the Book: A Taste of Appalachia—Cabbage Casserole from Travels with Foxfire and Further Reading

Southern Appalachia is home to the Great Smoky Mountains, bluegrass, and stock-car racing. It is a place steeped in the traditions of folklore, bootlegging, folk art, and the old way of doing things. You can find medicine women and wild ginseng collectors, moonshiners and “priviologists.” It is an area of the country and a culture that many Americans are looking to become more familiar with and understand.

Well, it’s no surprise that we at the Reading Group Center think that—next to experiencing it yourself—the best way to learn something is to read about it. And that the second best way is through your stomach. That’s where  Travels with Foxfire and the Foxfire Foundation come in. This latest book in the series introduces readers to stories of Appalachian life from various people, including author Jessica Phillips’s own grandmother, Lazell Vinson, who cooked at the historic Dillard House—a family-owned boardinghouse and restaurant famous for Southern cuisine.

To satisfy your craving for Southern food, we’ve included Vinson’s award–winning recipe for cabbage casserole, which you can find—along with others, including some from James Beard Award–winning cookbook author Joseph Dabney—in Travels with Foxfire. Serve up a cheesy plate of this Appalachian favorite, settle into a rocking chair and dive into the stories of people trying to keep the traditions of Southern Appalachia alive.

If you want to explore the region even further, check out our list of fiction and nonfiction books that are set in or focus on Appalachia. 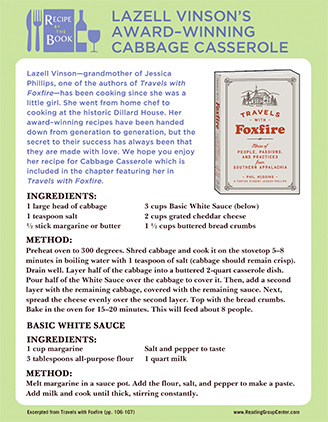 “One of the best young chroniclers of contemporary Appalachia. . . . Long Man dramatizes historical events that are still controversial today and raises issues that will resonate strongly.” —Mountain Xpress

Annie Clyde Dodson and her three-year-old daughter Gracie are among the last holdouts in a tiny town, standing in the way of progress in the Tennessee River Valley. Just a few days before the Long Man River is scheduled to wash the town of Yuneetah off the map, Gracie disappears one stormy evening. Did she simply wander off into the rain, or was she taken—perhaps by the mysterious drifter who has returned to his hometown on the verge of its collapse?

Set against the backdrop of actual  historical events, Long Man is a searing portrait of a soon-to-be-scattered community brought together by change and crisis, and of one family facing a terrifying ticking clock.

The Orchard Keeper by Cormac McCarthy

An American classic, The Orchard Keeper is the first novel by one of America’s finest, most celebrated novelists.  Set is a small, remote community in rural Tennessee in the years between the two world wars, it tells of John Wesley Rattner, a young boy, and Marion Sylder, an outlaw and bootlegger who, unbeknownst to either of them, has killed the boy’s father. Together with Rattner’s Uncle Ather, who belongs to a former age in his communion with nature and his stoic independence, they enact a drama that seems born of the land itself. All three are heroes of an intense and compelling celebration of values lost to time and industrialization.

“A worthy addition to the growing canon of contemporary Appalachian noir. . . .  Nitro Mountain is like the home we failed to escape.” —Electric Lit

In the mine-riddled town of Bordon, Virginia, a group of lost souls are bound together by alcohol, small-time crime, and music.

Leon is a lovesick bass player with a broken hand and a belief that next time—next time—he’ll definitely get it right; Jennifer is the bright-but-battered waitress who can’t quite escape the orbit of Arnett, the local drug dealer. When Jennifer convinces Leon to murder Arnett so she can finally be free, a dark chain of events is set in motion, its violence echoing the pain that shape their fractured lives.

“He is the greatest artist the South has produced. . . . [Yet] for all his concern with the South, Faulkner was actually seeking out the nature of man. Thus we must turn to him for that continuity of moral purpose which made for greatness of our classics.” —Ralph Ellison

First published in 1936, Absalom, Absalom! is William Faulkner’s ninth novel and one of his most admired. It tells the story of Thomas Sutpen and his ruthless, single-minded attempt to forge a dynasty in Jefferson, Mississippi, in 1830. Although his grand design is ultimately destroyed by his own sons, a century later the figure of Sutpen continues to haunt young Quentin Compson, who is obsessed with his family legacy and that of the Old South. “Faulkner’s novels have the quality of being lived, absorbed, remembered rather than merely observed,” noted Malcolm Cowley. “Absalom, Absalom! is structurally the soundest of all the novels in the Yoknapatawpha series—and it gains power in retrospect.”

“Short of doing it yourself, the best way of escaping into nature is to read a book like A Walk in the Woods.” —The New York Times

At Home in the Heart of Appalachia by John O’Brien

John O’Brien was raised in Philadelphia by an Appalachian father who fled the mountains to escape crippling poverty and family tragedy. Years later, with a wife and two kids of his own, the son moved back into those mountains in an attempt to understand both himself and the father from whom he’d become estranged.

At once a poignant memoir and a tribute to America’s most misunderstood region, At Home in the Heart of Appalachia describes a lush land of voluptuous summers, woodsmoke winters, and breathtaking autumns and springs. John O’Brien sees through the myths about Appalachia to its people and the mountain culture that has sustained them. And he takes to task naïve missionaries and rapacious industrialists who are the real source of much of the region’s woe as well as its lingering hillbilly stereotypes. Finally, and profoundly, he comes to terms with the atavistic demons that haunt the relations between Appalachian fathers and sons.

“[This book is] as powerful and direct as a bulldozer. . . . Resistance is the overriding theme here—that tough, tenacious instinct to survive with their pride and anger intact.” —Kirkus Reviews

First published in 1973, Skye Moody’s Hillbilly Women shares the stunning and raw oral histories of nineteen women in twentieth-century Southern Appalachia, from their day-to-day struggles for survival to the personal triumphs of their hardscrabble existence. They are wives, widows, and daughters of coal miners; factory hands, tobacco graders, cotton mill workers, and farmers; and women who value honest labor, self-esteem, and dignity. Shining a much-needed light into a misunderstood culture and identity, the stories within reflect the universally human struggle to live meaningful and dignified lives.