WHAT: SUBTLE BODIES, a novel

WHERE: Set in a upstate New York.

WHY: “This book abounds in wit.
“The modern classic Mating and its follow-up, Mortals, were hothouse experiments in human behavior: Take a bright couple, drop them in a foreign milieu, and watch their primal instincts slowly emerge. This book does much the same thing, though it’s set in Rush’s native United States.
“At its center is Ned, a middle-aged activist who has hastened to the castlelike home of his college friend Douglas, who has died in a riding-mower accident. Following close behind is his wife, Nina, who is outraged at Ned for leaving just as she reaches the peak in her fertility cycle; she wants to conceive. Its life-and-death themes settled fast, the novel largely explores the personalities of Ned and three other friends of Douglas who have arrived for the memorial. Douglas was a lifelong provocateur, and in college, this clan was hellbent on undoing social norms, but reconvened, they largely have memories of old bons mots and a 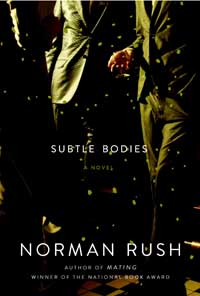 widow who’s trying to stage-manage the memorial to the last utterance.
“The setting is funereal, and Rush dwells much on the futility of warring against our natures, yet this book abounds in wit, particularly in its exploration of Ned and Nina’s marriage; alternating between their perspectives, Rush ping-pongs their thoughts about lust, love and accomplishment. Rush’s third novel is an outlier — but his concerns with our carnal and intellectual lives remain pleasurably, provocatively intact.”
—KIRKUS, a starred review

“A funny, deeply satisfying look at friendships — why we make them, why we keep them, and how they change us over time.”
—Carol Gladstein, BOOKLIST