WHAT: ASTONISH ME, a novel

WHY: “A supple, daring, and vivid portrait of desire and betrayal.
“Languishing in the corps de ballet of a premier New York company while her lover, internationally renowned dancer Arslan Ruskov, is captivating critics and audiences, Joan becomes pregnant and reunites with her high-school boyfriend, Jacob, now a doctoral student in Chicago. Though they build a life together for themselves and their son, Harry, Joan can never escape the role she played in helping Arslan defect from the Soviet Union.
“As she makes tentative peace with her new status far away from the footlights as a suburban mom and strip-mall ballet instructor, Joan pins her hopes on salvaging her career relevancy as she guides her neighbor’s daughter, Chloe, to professional status. However, it is Joan’s own son who astounds everyone by becoming the sought-after new prodigy. When he and Chloe cross paths with Arslan, the finely tuned life that Joan and Jacob constructed comes crashing down as long-held secrets are exposed in a particularly brutal way.
“Readers who reveled in Shipstead’s sardonic comedy-of-manners debut, Seating Arrangements, will rejoice in the emotionally nuanced tale of barre-crossed lovers and the magnetic, mysterious world of professional dance.”
—Carol Haggas, in a starred review for BOOKLIST

“With the same seamless precision found in the details of a beautiful ballet,
Shipstead moves her story back and forth in time, capturing the brutality of the training, the impossible perfection on stage, and the messy fallout that erupts when personal and professional lines blur.” —Beth Andersen, LIBRARY JOURNAL 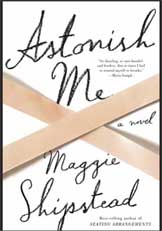