Posts Tagged ‘Officer and a Spy’

Media Center: ‘Officer and a Spy’ by Robert Harris

WHAT: AN OFFICER AND A SPY, a novel

WHY: “A gripping thriller.
“Major Georges Picquart is present on the day in 1895 that Alfred Dreyfus is publicly degraded as a traitor to his country, before his exile to Devil’s Island. Soon afterward, Picquart is promoted to colonel, to assume command of the Statistical Section, which is actually the army’s espionage unit.
“Picquart comes across evidence of another traitor spying for the Germans, and his investigation uncovers something unsettling: the handwriting of the spy, Walsin Esterhazy, is a perfect match for the writing on the letters that the French government claimed were from Dreyfus. Furthermore, review of the classified evidence against the exile reveals nothing of substance. Picquart pursues the truth, at personal and professional risk, in the face of superiors eager to preserve the official version of events.
“Harris perfectly captures the rampant anti-Semitism that led to Dreyfus’s scapegoating, and effectively uses the present tense to lend intimacy to the narrative.”
—PUBLISHERS WEEKLY, a boxed and starred review

“Alluring and complex. Espionage, counterespionage, a scandalous trial, a coverup, and a man who tries to do right.” —KIRKUS REVIEWS 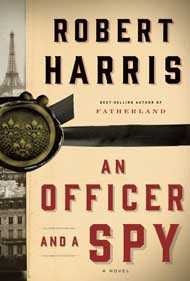 A NOTE FROM THE AUTHOR:

This book aims to use the techniques of a novel to retell the true story of the Dreyfus affair, perhaps the greatest political scandal and miscarriage of justice in history, which in the 1890s came to obsess France and ultimately the entire world. It occurred only twenty-five years after the Germans had crushed the French in the war of 1870 and occupied the territories of Alsace and Lorraine — the seismic shock to the European balance of power that was the precursor of the First and Second World Wars.

None of the characters in these pages, not even the most minor, is wholly fictional, and almost all of what occurs, at least in some form, actually happened in real life.

Naturally, however, in order to turn history into a novel, I have been obliged to simplify, to cut out some figures entirely, to dramatise, and to invent many personal details. In particular, Georges Picquart never wrote a secret account of the Dreyfus affair; nor did he place it in a bank vault in Geneva with instructions that it should remain sealed until a century after his death.

But a novelist can imagine otherwise.