WHAT: AMERICAN WAR, a novel

WHY: “An explosive, darkly cautionary tale.
“In 2074, the American South has once again attempted to secede from the Union, this time in ferocious opposition to the Sustainable Future Act, even as the ravages of global warming—severe storms, prolonged drought, and a massive rise in sea levels — cause waves of coastal refugees to pour into the Midwest as the federal government abandons deluged Washington, D.C., for Columbus, Ohio.
“The Chestnuts are getting by, living in an old shipping container in Louisiana, until Benjamin is killed in a bombing. Martina flees to a Mississippi refugee camp with her soon-to-be-rebel son, Simon, and twin daughters, fair and pretty Dana and dark, curious, and intrepid Sarat, the focus of this vigorously well-informed, daringly provocative speculative first novel by an Egyptian-born Canadian journalist.
“As Sarat grows into a six-foot-five, shaved-head warrior, she is radicalized by agents of a new Middle Eastern and North African superpower, the Bouazizi Empire. The war between Red and Blue is further compounded by raging plagues, while captured insurrectionists are tortured in a domestic Guantánamo.
“Catalyzed by his reporting on the Arab Spring; the war in Afghanistan; racial violence in Ferguson, Missouri; and environmental disasters, El Akkad has created a brilliantly well-crafted, profoundly shattering saga of one family’s suffering in a world of brutal power struggles, terrorism, ignorance, and vengeance. American War is a gripping, unsparing, and essential novel for dangerously contentious times.”
—Donna Seaman, in a starred review for BOOKLIST

“Part family chronicle, part apocalyptic fable,
American War is a vivid narrative of a country collapsing in on itself, where political loyalties hardly matter given the ferocity of both sides and the unrelenting violence that swallows whole bloodlines and erodes any capacity for mercy or reason. El Akkad creates a world all too familiar in its grisly realism.”
—PUBLISHERS WEEKLY, a featured starred review

“A dystopian vision of a future United States undone by civil war and plague.
An allegory about present-day military occupation, from drone strikes to suicide bombers to camps full of refugees holding ‘keys to houses that no longer existed in towns long ago deserted.'” —KIRKUS REVIEWS 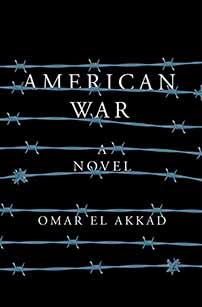