WHAT: THE ONLY STORY, a novel

WHY: “It will enrapture readers from beginning to end.
“In his newest mesmeric novel, Barnes, as in his Man Booker Prize-winner, The Sense of an Ending, portrays an older man, Paul, looking back at his early life. The title refers to how we all have one love story we tell that defines our lives as well as to the old conception of the novel as a literary form that explores love.
“In this instance, Paul details how at 19, toward the end of the 1960s in leafy Surrey, just outside London, he fell in love with Susan McLeod, a 48-year-old married woman, at a tennis club. As Paul and Susan plunge ever-deeper into love, Barnes beautifully demonstrates that their romantic fantasy — and, by extension, the novel as a genre focused solely on love — struggles to survive in the face of violence, financial practicalities, and alcoholism. With a narrator every bit as intriguing as Stevens in Nobel laureate Kazuo Ishiguro’s The Remains of the Day, the novel slowly unfurls, and the reader drifts along on Barnes’ gorgeous, undulating prose.
“Focusing on love, memory, nostalgia, and how contemporary Britain came to be, Barnes’ latest will enrapture readers from beginning to end.”
–Alexander Moran, in a starred review for BOOKLIST

“This deeply touching novel is a study of heartbreak.
By revisiting the flow and ebb of one man’s passion, Barnes eloquently illuminates the connection between an old man and his younger self.” –PUBLISHERS WEEKLY

Would you rather love the more, and suffer the more; or love the less, and suffer the less? That is, I think, finally, the only real question. You may point out—correctly—that it isn’t a real question. Because we don’t have the choice. If we had the choice, then there would be a question. But we don’t, so there isn’t. Who can control how much they love? If you can control it, then it isn’t love. I don’t know what you call it instead, but it isn’t love. Most of us have only one story to tell. I don’t mean that only one thing happens to us in our lives: there are countless events, which we turn into countless stories. But there’s only one that matters, only one finally worth telling. This is mine. 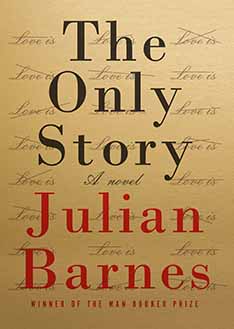