WHAT: THE PAPER TRAIL:
An Unexpected History of a Revolutionary Invention

WHY: “An illuminating, richly detailed history…
From China to Eurasia to Europe, how paper profoundly changed culture.
“Monro traces the invention, spread, and impact of papermaking from its origin in ancient China. A journalist who served as a news and features reporter for Reuters Shanghai, among many other publications, the author draws upon a deep background in Chinese history and impressive research in this dense study of not only paper, but also the development of writing and literacy.
“Writing, he says, began in Sumer, in Mesopotamia, site of the ‘first known extensive use of the wheel, irrigation, the plough and the arch.’ In order to keep records and accounts, Sumerians created signs and then images that represented sounds. The invention of a phonetic form of communication was ‘a groundbreaking innovation,’ to be sure, but because Sumerians wrote on clay tablets, their communication could not travel far. Egyptians adopted writing by the late 3200s B.C.E., making their messages more portable by inscribing them on papyrus, sheets pounded from the papyrus leaf; Monro distinguishes papyrus from parchment, made from animal hides.
“In China, bamboo ‘turned plants into the surface of knowledge’ and led to ‘an outpouring of history writing as well as bureaucratic records.’ Silk, too, was favored, until an inventor mixed bark, hemp, rags, and flax with water, mashed them to a pulp, and hung them to dry. Gradually, the technique moved from China to Korea and Japan, where papermaking ‘became an art form,’ and then to Arabia, where paper spurred the development of the Quran from oral recitation to sacred book.
“In the 1150s, paper was imported to Europe from the Middle East, but its use was not widespread for 100 years. In the 15th century, Gutenberg invented a press suitably strong for thick, rag-based European paper.” —KIRKUS REVIEWS

“An engaging, lively, informative examination of a ubiquitous resource and its multimillennia influence on the world.” —PUBLISHERS WEEKLY 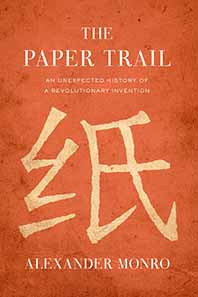